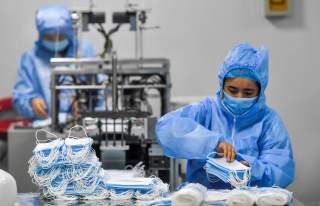 A novel coronavirus is spreading rapidly in China, causing a disease called COVID-19. The latest World Health Organization report puts the number of confirmed cases of COVID-19 at 73,332, with 1,873 deaths.

Despite widespread concerns that we are facing a new global pandemic, public health experts suggest that COVID-19 may become another endemic coronavirus, of which four already circulate in the world, including the common cold. This outcome would represent a significant public health burden, much like that posed by seasonal flu, which causes about 500,000 deaths globally every year.

But this view may fail to pick up on local or regional catastrophes. COVID-19 may evolve greater virulence by circulating in a population of people kept in close, unhygienic quarters, such as the estimated one million Uighur Muslims being held in detention camps in Xinjiang, north-west China.

To understand how this would be possible, it’s helpful to look at how one instance of influenza — the 1918 flu pandemic — evolved its extreme level of virulence and was responsible for the deaths of at least 20 million people.

That strain of influenza, which is thought to have infected much of the world’s population at the time, had a mortality rate of at least 2.5% — significantly more than that of seasonal flu, which is about 0.1%. Yet a unique quality of 1918 flu was the circumstances in which it evolved. The close quarters of trench warfare and the transport of sick people, which allowed the virus to be readily transmissible from people who were immobilised by their illness, created the conditions under which the virus could become both highly contagious and unusually deadly.

We’ve seen many examples of similar phenomena. Influenza has, for example, repeatedly evolved high virulence in industrial poultry farms, which group animals in the close-quarters necessary for this eventuality. It’s possible, similarly, that the virus causing COVID-19 evolved to its current form because of the wet market conditions in which it was first circulating in Wuhan, which are notorious for keeping animals under extremely close and inhumane conditions. But this factor probably explains the potential for transmission from animals to humans more than it does virulence in humans.

On January 27, 2020, it was reported that at least 24 people in the Xinjiang Uighur Autonomous Region (XUAR) had contracted COVID-19, with more than 1,200 people placed under medical observation. These camps may, like the western front or crowded poultry farms, create the conditions for the virus that causes COVID-19 to evolve into an especially deadly form.

Unlike what we’re seeing with COVID-19 now, where people must be more or less mobile to infect others, in a detention camp this constraint on the virus disappears. There it can evolve high specialisation and virulence in the species it’s infecting – in this case, people.

If the Chinese government cannot or does not curb the transmission of the novel coronavirus in Xinjiang, it’s possible that it will evolve, as the influenza virus did in 1918, to become even more dangerous to humans.

If the disease evolves greater virulence by circulating in the Uighur detention camps, the responsibility will lie with those who made the decisions — fuelled by what appears to be racism — to isolate these people in the XUAR. The #VirusThreatinCamps hashtag, recently launched on social media by Uighur activists in the US and Canada, aims to highlight the risks to these people.

According to an article in Radio Free Asia, China has created a media blackout in the XUAR, which raises the concern that the actual number of infected Uighur Muslims is much greater than the two dozen reported so far. Given the potential public health consequences COVID-19 poses, the coronavirus’s presence in the region must be made as widely known as possible.

Using the current estimates of 1-2% mortality, we may – not counting the risk of increased virulence – see many thousands of deaths in the camps and in the populations directly and indirectly affected by them. It falls on the rest of the world to demand that China make clear what is happening in the region.