Coronavirus Will Force Us To Rethink the National Security Debate 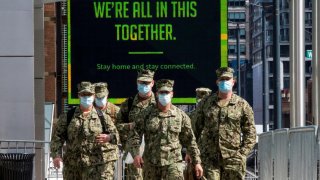 In a new article at Responsible Statecraft, I ponder the possible implications of the COVID-19 outbreak on the future of U.S. foreign policy. U.S. government officials are responsible for identifying and prioritizing among many national security threats, and generally trusted with finding the most appropriate tools for addressing those threats. There are obvious tradeoffs. For example, the U.S. military – that mostly deals with problems “over there” – competes for resources with those institutions responsible for defeating threats to public safety here in the United States.

Pentagon spending advocates – hawks in the usual parlance – are likely to argue that we shouldn’t cut the military in order to free up more resources for public health. We’ll soon go back to normal, they’ll say. COVID-19 was a black swan event. From their perspective, it would be unwise to reorient our national security strategy and spending to deal with one type of threat at the expense of all others.

That isn’t exactly how politics responded after 9/11, also a black swan event – but, in that case, the military eventually came out on top. In fact, anyone arguing against the militarized approach (i.e. so‐​called doves), and who saw counterterrorism as chiefly an intelligence and law enforcement problem, was attacked by the hawks for not taking the threat seriously enough. Only a war would do. Anything less was naïve — or even callous, a sign of indifference to the inevitable suffering of those future victims of certain terrorist attacks.

That perspective, fixed within days or weeks of September 11, 2001, has persisted. Even today, proposals to remove U.S. forces from Afghanistan, for example, are met with dire warnings that this will increase the risk of future terrorist incidents here in the United States. Only an ongoing and open‐​ended U.S. military presence, we’re told, can manage this risk. And nothing will eliminate it. The best we can do is manage the danger.

Will such arguments survive the current crisis here at home? What politician will make the argument that Americans might have to die of COVID-19 today in order to ensure that other Americans are not killed by a terrorist in the future? And might those military personnel so active in helping to build foreign countries be needed to save this one?

The suggestion seemed absurd for generations. There was no such danger nearby, or even on the horizon.

The danger is now here.

So, whereas it was once considered naïve to doubt that terrorism posed a very grave threat to public safety, will pandemic skeptics in the future be panned as dangerously out of touch with reality? Will the claims of traditional defense hawks, who could be counted on to make a full‐​throated case for every ship, tank, or missile that the Pentagon wanted (and even a few that it didn’t), now be subjected to greater scrutiny? At a minimum, it seems likely that some senator or congressman will ask, for example, how that ship, tank, or missile, might perform against a killer pandemic.

In the post‑9/​11 era, a few dared to question whether the massive costs we had incurred (not merely in our wallets but also to our liberties) amounted to a needless overreaction. But most Americans fell meekly into line – literally. The lines manned by TSA agents. Or at sporting events. Or public buildings. Will a similar pattern play out post COVID-19? The early signs are troubling.

On the other hand, the disease and its aftermath should prompt a robust debate over how best to preserve U.S. national security. In a peculiar twist, those calling for more spending to defeat diseases could be called the pandemic hawks, while those arguing against (and preferring that most resources remain with the military) become the doves. The suggestion might seem bizarre, and the terms hawk and dove pertain to more than spending priorities. But, as I conclude at Responsible Statecraft, “while the coronavirus won’t change everything, it will change many things.”

Finding the proper balance between public safety and personal freedom post‐​COVID‐​19 “will require us to revisit all of the things that we say we need to do to keep us safe. And it should entail finally shifting resources away from the military, and dropping a militarized approach to global problems, in favor of the many other instruments of American power and influence.”

You can read the whole thing here.

This article by Christopher A. Preble first appeared in CATO on April 4, 2020.