Coronavirus Will Harm These People the Most 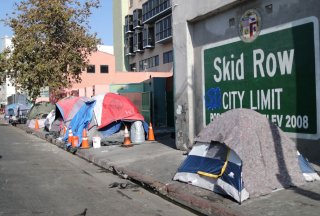 The coronavirus has changed almost every facet of American life. It has disrupted work routines, sent children home from school, and stress-tested the global supply chain.

Medical researchers have warned for weeks that the new coronavirus, which causes the disease COVID-19, is particularly dangerous to seniors and those with underlying health conditions.

But in West Coast cities such as Seattle, San Francisco, and Los Angeles, public authorities are quickly discovering another potential tinderbox for infection: homeless encampments.

This has caused significant political discomfort. Three weeks ago, when Seattle radio host Jason Rantz warned about the potential for an outbreak within homeless encampments, progressive activists slammed him as a “fascist” hoping to set up concentration camps for the most vulnerable.

However, within days, the progressive narrative collapsed—the homeless are, in fact, uniquely vulnerable to the COVID-19 pandemic. As The New York Times put it:

[The homeless] are more susceptible to contracting the disease … because of the cramped quarters in shelters, the sharing of utensils and the lack of hand-washing stations on the streets. Once infected the chronically homeless are more likely to get much sicker or die because of underlying medical conditions.

In San Francisco, public authorities are testing 30 homeless individuals who are hospitalized with symptoms of the coronavirus. If this population tests positive for the disease, the homeless would represent nearly half of all total confirmed cases countywide.

In response, the local government is scrambling to secure quarantine facilities for the homeless, with County Supervisor Matt Haney suggesting that the government requisition downtown San Francisco’s W Hotel to provide emergency shelter.

In Seattle, political leaders have begun to acknowledge that the homeless present a frightening transmission vector. However, amid this crisis, the city’s political class has been careful to maintain its social justice doctrine.

In his announcement about emergency measures, King County Executive Dow Constantine made sure to “acknowledge the historical legacy that race and racism bears on geography and economics,” promising to base his response on the county’s “equity and social justice work.”

Although this simply may be rhetorical cover for placing quarantine sites in poor neighborhoods, it hardly signals a serious response in the face of an epidemic.

So far, the West Coast’s homelessness response has been a disaster. Los Angeles has released 600 inmates from the county jail and directed officers to cease arrests for low-level crimes. San Francisco has shut down all regular business and effectively ceded the streets to homeless encampments, open-air drug markets, and dumpster fires.

In Seattle, a quarantined homeless man escaped from an emergency facility, stole food from a nearby 7-Eleven, and disappeared on a public bus, prompting the public to fear exposure to the disease.

And yet, despite billions in public spending, the number of people on the streets has increased dramatically over the past decade.

At this point, the coronavirus has proven to be the great revealer. It has exposed the fragility of our economy, the limits of our supply chains, and the decadelong  failure on homelessness.

Progressive leaders preach compassion, but the result of their policies is cruelty. Before this crisis is over, there likely will be hundreds of deaths among the homeless that could have been prevented with better policies.

Once life returns to normal, citizens must hold the inept leadership of America’s West Coast cities accountable for their actions. If they do not immediately change course, they will cause tremendous harm to those on the streets.

This article by Christopher Rufo originally appeared at The Daily Signal. This article first appeared in 2020.