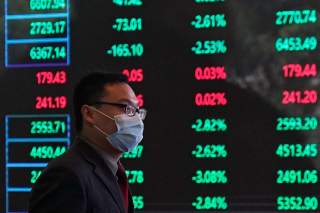 Reading the Western press, one could be forgiven for believing that China is well on its way to Judgement Day. The most ideological opponents of the PRC regime are giddy with excitement. The rest of us are watching our stock portfolios and feeling nauseous. South Korea could be the next domino to fall into crisis with Southeast Asia and Japan following in succession. Europe, according to this logic, could also be doomed, with a significant spread of the virus into Italy unlikely to be contained since the offending microbes were already there for weeks before it was apparently discovered. “Fortress America” is still looking pretty solid, albeit with a few noteworthy cracks. However, those pesky Chinese are refusing to send us Americans an adequate number of surgical masks and other pandemic paraphernalia. How dare they prioritize their own health care over ours?

Looking at the facts of the crisis, however, one realizes that this pandemic is neither the end of the world, nor the end of China (as presently configured). Like many stories hyped in today’s American media, headlines (and thus “clicks”) are optimized for advertising by moving from “crisis to crisis,” whipping up hysteria. This unfortunate phenomena, visible in all the major U.S. newspapers, is one reason that world politics are in considerable disarray, since they generate a constant focus on conflict and continuously spur rivalry. That tendency toward rivalry or what might be called the “xenophobic norm” is not helpful in present circumstances, since it is hardly conducive to the kind of intensive international cooperation that is now required against the coronavirus outbreak. Knowing well that the author is neither epidemiologist, nor economist, but rather just your humble sinologist, let us take in turn the notorious COVID-19 virus, the economic impact, and the implications for China’s future.

To be sure, there are some disturbing things about the coronavirus. It’s crafty, since its incubation period is lengthy. Moreover, it seems to spread briskly – perhaps implying that efforts to halt its spread are doomed to failure. On the other side of the ledger is a very considerable amount of good news that ought really to put most of the world at ease. The mortality rate is thankfully low – considerably lower than SARS.  Moreover, the deceased victims of the disease are, for the most part, the elderly. Initial surveys of Chinese mortality, for example, showed the median age of virus victims to be 75. And many of the elderly who have succumbed are people who have other serious conditions. Again, initial China research studies of mortality offer a possible key insight. Chinese elderly men are dying from the disease at nearly twice the rate of women. A rather viable hypothesis for this phenomenon is that Chinese men are also much more prone to smoking cigarettes. Thus, it has been suggested that elderly smokers are the group most endangered by the virus. Not to underestimate the pain and risks for this sub-group, but they were actually likely to have major health problems anyhow, as has been well understood by health professionals for decades.

The best news of all, of course, is that children seem to be almost completely immune. That fact may imply that global warming, once again, is the much graver threat to the world’s future. Hence, we might briefly plead with editors around the world to accord at least equal attention to that issue, which somehow is often lost in the shuffle of crisis-to-crisis coverage. We can only wonder how much progress on climate change might have been achieved if just half the articles on “Russia-gate” from the last four years were instead about aspects of the impending climate disaster.

Returning to the impacts of coronavirus, the economic costs may well be most damaging to the world’s wellbeing. With Hubei in a total lockdown of unprecedented proportions, this means that the beating heart of manufacturing within the world’s factory of China [世界的工厂] has seized up in a full-up infarction (heart attack). And no doubt, Beijing’s economic managers will be reaching for the defibrillator. Even the slightest knowledge of Chinese geography reveals that Hubei is the worst possible location in China for a massive quarantine given its location in the very center of the country and at the juncture of key transport nodes.  Yet, considering the reasonably good news on the health front relayed above, it is quite possible that after the initial fumble, Beijing has made a significant overreaction with its colossal shutdown of all movement between major provinces. Now, Chinese leaders are in a bind, since they need to continue to show an iron will to grapple with the disease, and yet it is rapidly becoming clear that the remedy could be far worse than the offending illness in the first place.

The overreaction may be explained as the result of two aspects of Chinese culture. First, there is the collectivist and related statist impulse to bring the full resources of the vast nation into a “people’s war” against the virus. Dramatic and draconian measures, such as the quarantine, imply that Beijing is taking decisive action. The many pictures of Chinese military forces flowing into Wuhan support this grand narrative.  Somewhat less obvious might be the Confucian aspects of the Chinese response to the crisis. If the Coronavirus is disproportionately endangering the elderly population, it may not be surprising that a society known for special reverence for the aged will be even more severely impacted in a psychological way – perhaps even tending toward somewhat irrational conclusions. This analysis takes nothing away from the exceedingly brave doctors, nurses and specialists on the front lines in Hubei and elsewhere. Likewise, the workers who have put in all-night shifts to stand up new emergency hospitals are also deserving of praise and perhaps emulation. Still, it may well be time for Beijing to take a more mellow approach, which accepts that the virus will inevitably spread quite widely through the population. At least, a more mixed approach would seem to take greater account of larger economic realities.

In the economic realm, one also confronts dire predictions that the “sky is falling.” Still, it should be realized that economic hardship flowing from the coronavirus need not lead to a global tragedy and could even have a silver lining. Some American cynics have used China’s hardship to imply that business needs to look elsewhere for reliable suppliers. The argument actually does have some merit in the sense that globalization has too often haphazardly ignored the possibility of shocks and that this crisis may help guide businesses to greater diversification of global supply chains. The possibility of recession is significantly increased by the coronavirus. That is for sure. However, it is just as certain that the tariff mania, which has infected U.S. economic policy for the last several years had led to a global economy teetering on the brink of a significant recession. In any case, the coming recession has been pre-ordained, more or less, given the unprecedented number of consecutive quarters of growth. Did it have to be this bad? Most likely not.

In Chinese, it is well known that the word for “crisis [危机]” is quite closely connected to the word for “opportunity [机会].” One interesting scenario that has not been discussed is whether or not that President Xi Jinping might wish to allow coronavirus to induce a severe recession in China. That would have obvious risks, not least the misery and anger of millions of Chinese, but it could allow Beijing to enact a number of market-based reforms, including in the giant and severely bloated manufacturing and energy sectors. The crucial health, educational, banking, and environmental domains of the economy could also be due for very fundamental overhauls. It may be said that in economics and social development:  “no pain, no gain,” and Beijing has too often viewed building ever more infrastructure as the solution to all societal ills.  Americans may reflect on the fact that many of Franklin Roosevelt’s progressive reforms (e.g. social security) could probably only have been undertaken in the midst of a grave economic crisis.

China is a resilient country and has been through far worse circumstances (many times) in modern history. While it is unquestionably true that that the Chinese doctor Li Wenliang deserves plaudits and high honors, the tone of the related Western press coverage has treated the episode as if he was tortured and imprisoned – hardly the case. He was briefly reprimanded and then the local Wuhan authorities subsequently apologized for their inappropriate treatment of the doctor-hero, who himself sadly fell victim to the disease he discovered. True, Beijing could have moved faster and with greater transparency in the response. But Chinese authorities have responded now with a massive effort. A couple of years hence, the coronavirus most likely will be forgotten in China, for the most part, but the health system and the hygiene controls around the country’s markets, etc. will have been substantially improved.

Meanwhile, Washington’s response, which has mostly consisted of angry appeals for greater Chinese transparency have only added additional bitter bile to the poisonous swamp that now characterizes contemporary U.S.-China relations. It did not have to be this way. A nearly continuous parade of U.S. tariffs and sanctions over the last three years have shaken the world economy to its core and set the stage for a significant global recession. Even as large-scale investigations of any and all China-related scientific research go forward with arrests at leading American research centers and the NIH, American policy-makers seem surprised that their offers to send American liaison officers from the Atlanta Centers for Disease Control are rebuffed by Beijing. That is the sad result of the crude and ideologically hostile position that the U.S. has taken toward China during the whole of the present Administration.