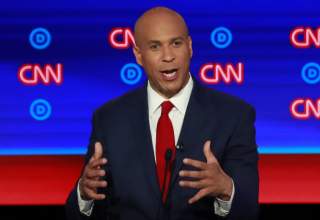 “But the criminal courts is what is giving Donald Trump the ability to truly violate the human rights of people coming to our country, who no one surrenders their human rights,” Booker said when asked about his proposal to decriminalize illegal immigration into the country. The New Jersey senator argued illegal entry into the U.S. should be a civil offense rather than a criminal offense.

“And so, doing it through the civil courts means that you won’t need these awful detention facilities that I have been to — seeing children sleeping on pavement, people being put in cages, nursing mothers, small children. This is not necessary,” he continued on Wednesday.

However, a fact check by the Associated Press found this claim to be misleading. The nonprofit news agency pointed out that simply decriminalizing illegal entry into the U.S. would not mean the end of migrant detention centers.

“It’s true that there could be reduced immigration detention at the border if there were no criminal charge for illegal entry,” the AP wrote. “But border officers would still need to process people coming over the border and that could lead to temporary holding, such as the so-called cages that Democrats call inhumane.”

Furthermore, the AP pointed out that Immigration and Customs Enforcement (ICE) would still place illegal aliens in detention if they are accused of major crimes. While the numbers would be reduced, migrant detention would continue even if illegal entry into the U.S. is no longer a criminal offense.

An analysis by Syracuse University found that, of the 47,486 people detained by ICE in December 2018, 29,753 had no prior conviction, making them likely to be released if the law was changed. However, there were still 6,186 migrants who touted “serious crime convictions.” Over 2,000 held other convictions, and another 9,310 had minor violations that could still be used to keep them in detention.

Booker released a comprehensive immigration proposal in early July that he claimed would “virtually eliminate immigration detention.” However, the large volume of illegal aliens with criminal backgrounds reaching the U.S. border means migrant detention centers will continue to exist.

The issue of border decriminalization has deeply divided the field of Democratic presidential hopefuls, with moderates arguing such an action would further exacerbate the immigration crisis, while the more liberal wing of contenders argue it’s the only way to end family separation.