The Cost of Endless War on Military Families 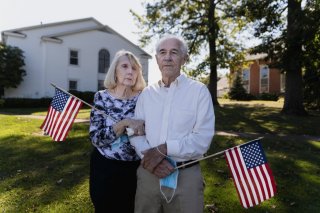 With the United States endlessly engaged in military conflict around the world, it may come as a surprise that only one percent of Americans serve in the military, and only seven percent identify as veterans. However, this small percentage of Americans has carried a huge burden of the costs of the post-9/11 wars that started twenty years ago in Afghanistan and Iraq, under President George W. Bush’s “War on Terror.”

On the latest episode of Press the Button co-host Tom Collina sits down with the executive director of the Secure Families Initiative, Sarah Streyder, to discuss the impact of these wars on the home front. Streyder highlights that the “heightened tempo” of the past twenty years has fallen on the “shoulders of service members.” As a proud military spouse, Streyder works to combat the key challenges the military community is facing.

One of the largest challenges is that the past twenty years of war have led to an increase in mental illness and high suicide rates in the military. Notably, the Cost of War Project has found that there have been more deaths as a result of suicide by active military personnel and veterans than deaths due to conflict. As of June 2021, suicide deaths among the military were estimated at 30,177, and combat deaths were estimated at 7,057. This striking reality should be an extreme cause for concern.

Streyder emphasizes the bottom line: “When you hear about something like high suicide rates in the military or other tragic challenges facing our community, I want folks to understand the connection between those and the foreign policy decisions that exacerbated them because it's not like these things are happening in a vacuum.” In other words, these tragedies facing the military community are directly related to the decisions by the past three U.S. Presidents to engage in endless war and policies that remain to this day.

Streyder calls attention to the fact that “we can't keep putting band-aids on the problem by simply investing in DOD [Department of Defense] support services and hoping that it's all going to go away, we also have to take a critical eye at the upstream causes that make it harder and harder to solve these challenges.” The upstream effects include policies such as the 2001 and 2002 Authorizations for the Use of Military Force (AUMFs), which have permitted the executive branch to engage the military abroad without periodic congressional approval. This is not only unconstitutional, but also means that Americans have not had their voices heard through their congressional representatives on issues of whether or not to send troops abroad, and to what end.

It seems ironic to think that those who join the military actually do not view consistent ongoing conflict as the best modus operandi for the United States to address national security concerns. “I think too often military service is associated in our minds with foreign policy hawkishness, and that is the opposite of what most of us want,” Streyder voices. In fact, the Secure Families Initiative starts from “the baseline principle that if the President is going to send our loved ones into harm's way that we deserve for those decisions to be as deliberative and transparent and constitutional as possible.” This includes repealing the AUMFs and reminding Congress of their constitutional duty to debate and vote on issues of war and be held accountable for those decisions.

Streyder points out that the small percentage of the population serving in the U.S. military is leading to ripple effects that the U.S. will have to face down the line if policies do not shift now. This includes fewer people volunteering for military service as she notes, “some families who are multi-generational military families… are finally deciding to not recommend the military service lifestyle to their kids because it's become too much.” Streyder explains that this “makes our jobs as advocates harder” because “we see a large gap in understanding between the minority of Americans who serve and the majority of Americans who don't.” While she finds it is still possible to rally enthusiasm for legislation that supports the troops, it’s hard to find people “with a fluent understanding of what such supportive policies actually look like,” and craft those policies in the first place.

The solution, she sees, is telling policymakers to start “investing more in non-military tools like diplomacy and development that can prevent conflicts from ever arising.”

The entire interview with Sarah Streyder is available here on Press the Button. You can find out more about the Secure Families Initiative on their website, including the video mentioned in the interview on 20 years of US military involvement in Afghanistan.