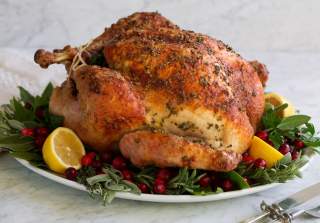 Key point: Despite all of the bad news, the data shows that the world is improving as is the quality of life.

Watching the news or discussing it with your family at Thanksgiving dinner, it is not hard to fall into the trap of thinking that the entire world is moving in a negative direction. It may be a challenge to find reasons for optimism, let alone thankfulness. But as the Thanksgiving holiday draws near, know that the data clearly show that a great many things are improving.

Please don’t just take my word for it. To see the evidence for yourself, just spend some time poking around the data on HumanProgress.org. Our database documents progress in areas as diverse as air travel safety (welcome news for those traveling for the holiday) and declining rates of hunger and poverty.

One thing that has improved over time is the cost of Thanksgiving dinner itself. After declining in recent years, in 2019 the nominal cost of Thanksgiving has increased by just a single cent, according to the latest numbers from the American Farm Bureau Federation, an industry group representing the country’s farms.

The AFBF sent a total of 250 volunteer shoppers to check prices at grocery stores in 38 different U.S. states for this year’s survey. The volunteers were instructed not to take advantage of any special promotional coupons or purchase deals. So the AFBF survey may actually overestimate the cost of Thanksgiving dinner.

Adjusting for inflation reveals even better news, showing that the cost of Thanksgiving dinner declined slightly from last year, decreasing by nearly 2 percent to reach close to an all-time low. 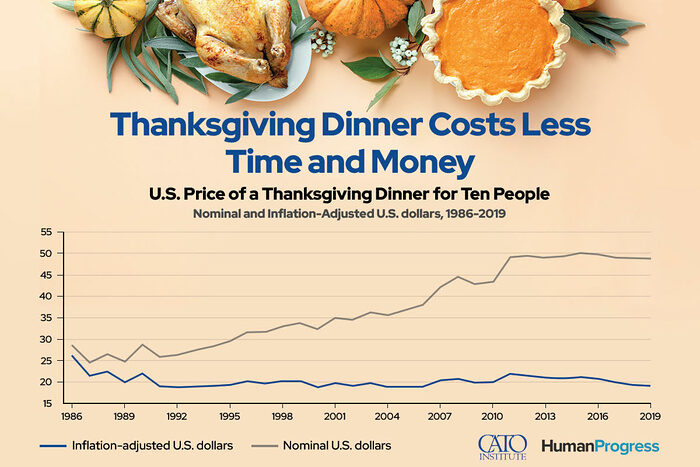 That’s great news for the 90 percent of Americans who celebrate Thanksgiving. Fortunately, the main course on many Thanksgiving tables, the turkey, costs slightly less than last year. In 2019 the average nominal cost of a Thanksgiving turkey stands at $20.80 for a 16-pound bird. That’s roughly $1.30 per pound, a 4 percent decrease from last year. And that’s before adjusting for inflation!

The inflation-adjusted cost of Thanksgiving has fallen every year since 2015, as has the nominal cost, with the exception of this year’s 1 cent increase.

That’s according to Professor Gale   of Brigham Young University at Hawaii, who co-authors the Simon Abundance Index with the editor of HumanProgress.org, Marian Tupy. The Index measures the changing prices of 50 basic commodities and how they relate to changes in the size of the world population.

The Simon Abundance Index for 2019 found that for each percentage increase in the world’s population, the average time price of commodities (e.g., the amount of time working needed to earn enough to buy commodities) has declined by slightly more than one percent. You can explore the Simon Project findings in depth on HumanProgress.org.

It seems that, on average, every child born on our planet over the past decades has grown up to make resources less scarce by contributing to innovation and the global economy. And as resources become more abundant, they also come down in price. That allows each one of us to spend less time working to afford goods like Thanksgiving dinner, and more time on what matters most to us. As you gather around the Thanksgiving table, that is something for which you can be thankful.

This article by Chelsea Follett originally appeared in the CATO at Liberty blog in 2019.