Could the Air Force End Up with 200 New B-21 Stealth Bombers? 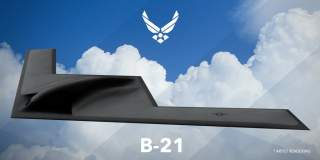 The U.S. Air Force is getting bases ready for its new B-21 Raider stealth bomber. But it’s still unclear how many B-21s the flying branch might buy.

The Air Force selected Tinker Air Force Base in Oklahoma as the primary maintenance facility for the new bomber, the service announced on November 16, 2018.

None of the choices are surprising. Tinker already hosts a major Air Logistics Complex, whose nearly 10,000 civilian and military employees do deep maintenance on older B-1B and B-52 bombers as well as KC-135 tankers and E-3 and E-6 command planes.

“The decision to use these bases marks the next milestone in the development and eventual deployment of the B-21, a long-range and highly-survivable aircraft capable of penetrating air defenses and conducting a range of critical missions,” the Air Force stated, adding that the first Raiders should reach the force in the mid-2020s.

But it’s an open question how many B-21s the Air Force will get. At the time the Pentagon tapped Northrop Grumman to build the Raider, back in October 2015, officials said they expected the Air Force to acquire between eighty and one hundred B-21s for an overall cost of around $20 billion.

By the time of the Air Force’s 2017 budget request, the minimum number of new bombers had grown to one hundred. “We require a fleet size that will ensure sustained dominance well into this century and intend to procure a minimum of 100 B-21s,” the Air Force explained in a budget document. “Procuring at least 100 B-21s will also reduce lifecycle ownership costs. Further, we are continuing to study the right size of the total future bomber force.”

The plan at the time was for the B-21 to replace existing B-2 and B-1B bombers at their bases in Texas, South Dakota and Missouri. “Using the current bomber bases will minimize operational impact, reduce overhead, maximize re-use of facilities and minimize cost,” Air Force officials said.

In 2018 the Air Force possessed twenty 1990s-vintage Northrop Grumman B-2s and 63 B-1Bs that Rockwell built in the 1980s. The service expects by the late 2030s to operate at least one hundred B-21s alongside upgraded, 1960s-vintage Boeing B-52H bombers, seventy-six of which were in service as of late 2018.

“Although the goal was not accompanied by specific procurement plans, observers note that would likely necessitate 75 additional bombers, with only the B-21 then in production,” the Congressional Research Service noted in an October 2018 report.

Alternatively, the Air Force could keep older bombers longer, CRS added. “In deciding whether and how quickly to acquire B-21s, Congress may wish to consider the trade-off between the cost and effectiveness of new aircraft and extending the service lives of existing B-52s, B-1s and B-2s.”

“This may be a challenging comparison, particularly as the B-52s are already scheduled to remain in service for 80 years, an unprecedented service life for a combat aircraft,” CRS continued. “Quite apart from the B-52’s suitability to operate in evolving air-defense environments, the challenges of maintaining and operating an 80-year-old aircraft in regular service are unknown.”

If the Air Force indeed adds five bomber squadrons and retires the B-52H along with the other older bombers, it could need more than two hundred B-21s, significantly adding to the program’s cost.