Could America Face Another Gulf Of Tonkin Incident With Iran? 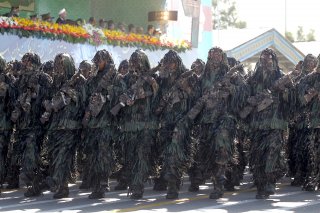 Here's What You Need To Remember: One can only hope that an isolated incident or an alleged attack does not spark a retaliation that could lead to a Vietnam-style conflict with Iran, one that could necessitate sending hundreds of thousands of U.S. troops to the Middle East. While President Trump has said he does not want to go to war with Iran, President Johnson likewise did not want to start a war with North Vietnam.

Many analysts have argued that the rising tensions between the United States and Iran in the Persian Gulf region, especially the claims by the United States that Iran is increasing its military capabilities bear disturbing similarities to the run up to the Iraq war in 2002 and 2003, when the Bush administration falsely hyped Iraq’s pursuit of weapons of mass destruction. While this analogy may be correct, the events are actually more similar to the Gulf of Tonkin incident, which occurred in August 1964—something I remember well.

While President Lyndon Johnson’s national-security team was deliberating how to respond to this situation, another attack occurred. At 9 a.m. on August 4, 1964, the Maddox reported that, based on radar and communications intercepts, North Vietnamese ships and aircraft were poised to wage another attack. Two hours later it claimed that it had actually been attacked by North Vietnamese torpedoes—a claim the captain of the Maddox eventually backtracked on.

But that same night President Johnson interrupted national television news to describe the incidents to the American people, and announced that, in retaliation for these attacks, he had launched air attacks against North Vietnamese boat bases and oil storage facilities. The next day, the president asked Congress for authorization to use all necessary means to deal with the threats from North Vietnam. But neither the president nor his secretary of defense, Robert McNamara, let the American people or their elected representatives know that the South Vietnamese patrol boats, which were purchased by the United States, conducted raids and bombing of North Vietnamese islands, under a U.S. plan, shortly before the first attack occurred, and that there was no real evidence of an August 4 attack. In effect, those attacks were a staged, false flag event.

The Johnson administration used the Congressional resolution—passed on August 7, 1964, by a unanimous vote in the House and with only two negative votes in the Senate—to begin a massive air and ground war on North Vietnam that marked the beginning of the disastrous war that lasted another decade. Johnson himself was not enthusiastic about launching the bombing campaign. In fact, he had overruled his national-security team on it on four previous occasions. However, he felt he had to take this action after the August incidents became public in the midst of the 1964 presidential campaign in which his opponent, Republican Sen. Barry Goldwater was urging a strong military response to the North Vietnamese attacks. Moreover, many members of the foreign-policy elite were concerned about all of Vietnam falling to the Communists, which according to the so-called domino theory would mean that, once Vietnam fell, Communism would spread to the rest of Southeast Asia.

At the time of these incidents, I was serving on active duty as a Naval flight officer in Patrol Squadron One that was getting ready to deploy to the Pacific. At lunch with my commanding officer, who had flown combat missions in WWII and Korea, the day after Johnson’s speech, he told me that based on intelligence he had seen it was clear to him that the second attack had never occurred and the whole incident was bogus. A decade later, when I had the privilege of serving under Adm. James Stockdale (the only Vietnam POW to earn the medal of honor) at the Naval War College and who was actually flying in the area where the attacks supposedly occurred, he told me the same thing.

Which brings us back to today. Given the current buildup of U.S. forces in the Persian Gulf region—which now include a six-ship carrier battle group equipped with at least fifty combat aircraft, a U.S. amphibious ship which transports Marines and their equipment, a Patriot missile battery, and four nuclear-capable B-52 bombers—as well as the attacks on two Saudi oil tankers and four ships off the coast of the UAE, and the Iranians placing missiles on small boats, there is a serious risk that accidents or miscalculations could happen again.

One can only hope that an isolated incident or an alleged attack does not spark a retaliation that could lead to a Vietnam-style conflict with Iran, one that could necessitate sending hundreds of thousands of U.S. troops to the Middle East. While President Trump has said he does not want to go to war with Iran, President Johnson likewise did not want to start a war with North Vietnam. But one cannot overlook National Security Advisor John Bolton, who recently said, “Any attack on America or its allies will be met with unrelenting force.”

Dr. Lawrence J. Korb is a senior fellow at the Center for American Progress, and served as assistant secretary of defense from 1981 through 1985, and taught at the Coast Guard Academy from 1971 to 1975. This article first appeared last year.