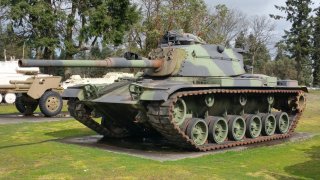 Key point: Raytheon is offering an update to the Patton that makes it a killer (of tanks), but not a survivor.