Could the Army's New Scout Helicopter Have Wings? 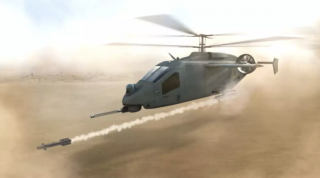 When the U.S. Army retired their fleets of OH-58 Kiowa scout helicopters, they ran into a rather sticky predicament as a result of their short-sighted haste: they had no adequate replacement for the venerable scout.

In the aftermath of the 2017 retirement of the Kiowa Warrior series, AH-64 Apache helicopter attempted to fill the role, with mixed success.

“The Apache is the best attack helicopter in the world, but it’s not the best-armed reconnaissance helicopter,” U.S. Army Brigadier General Walter Rugen of Army Futures Command said earlier this month. “We need a smaller form factor that can hide in the radar clutter and that has reach.”

The Army’s Future Attack Reconnaissance Aircraft (FARA) program is in search of a fast, agile scout, which can bring long range, sensor suites and fierce armament to bear.

While Bell-Textron, Airbus, Boeing, and Sikorsky are sure to throw their hats in the ring, a lesser-known competitor team has also entered the fray: AVX and L3 Technologies, with a fascinating and unique-looking scout chopper- that barely looks like a chopper at all.

“We are extremely pleased to reveal the design for this very important U.S. Army program,” Troy Gaffey, AVX CEO and Chief Engineer, said in a press release. “AVX and L3 provide unique engineering design skills and manufacturing expertise that will provide the Army with an advanced, lethal and affordable reconnaissance and light-attack platform.”

According to The Drive, the winged helicopter has co-axial rotors, ducted fans, and rear stabilizers, as well as a fierce-looking chin-mounted Gatling gun under the side-by-side cockpit.

The cockpit will feature a fly-by-wire control system and modular avionics, which will assist in the impressive array of surveillance systems and weapons platforms.

In addition to being fast and deadly, the aircraft are also small- the design would have folding rotors and wings that would allow it to fit inside of a C-17 Globemaster III transport, or even slide into the hangar aboard a Navy destroyer.

While the design faces stiff competition, one thing is for certain- the future of scout aviation looks pretty awesome.