Could Artificial Intelligence Prepare U.S. Pilots for War Against China and Russia? 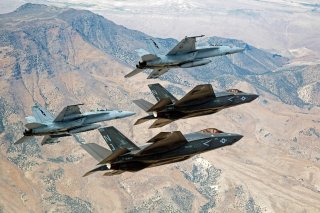 The U.S. Navy and U.S. Air Force are working on a new generation of training technologies to prepare their fighter aircraft for new Russian and Chinese air threats posed by the Su-57 fighter and J-20 fifth-generation stealth aircraft, respectively.

Over the next two years, the U.S. Air Force plans to use a cutting-edge computer technology called the P5 Combat Training System (P5CTS), made by a firm called Cubic Mission and Performance Solutions. Information from Cubic describes the P5 as an encryption solution intended to improve U.S. Air Force and U.S. Navy pilot training for advanced, high-threat combat scenarios using advanced computer simulations, wireless networks, and artificial intelligence (AI)-enabled data organization. Interestingly, the P5 pod can be seen in the now-famous Top Gun Maverick movie on a F/A-18 fighter.

“Over the course of the last 13 years, we’ve learned some critical lessons about integrating fast movers with virtual environments to provide a realistic presentation to the aircrew in their cockpits. Having a wireless network that allows you to sustain that environment without interruptions. In other words, a low, flat latency is a very important feature,” said Cubic’s training expert, Paul Averna. “It’s important in this training environment to have a dedicated LVC processing capability, so that you are not diminishing the combat capability of the aircraft that are connecting and using the system. You don’t want their computer resources to be impacted because they’re trying to participate in an LVC environment. So that’s an important additional capability that is needed.”

At the same time, the security features for this SITL LVC environment need to be scalable, meaning multinational training can take place within a common technological framework while still keeping essential information separate or enclaved to ensure security for any data that might not need to be shared. “Having multiple independent levels of security. And why is that important, because we’re going to operate with coalition partners that may not be able to see the same level of classification of data and effects that we would maybe exchange on the web as a joint DoD force, but we nonetheless are going to have to go to war and potential peer conflict with our coalition partners,” Averna said. “Having that architecture allows us to have different enclaves where coalition participation can occur…and we don’t have to give away all the secrets to allow them to join and train with us.”

Cubic technology and weapons experts explain that SITL LVC enables continuous, seamless presentation to all the participants. The ability of these computer simulations to replicate and analyze the parameters of air combat concerning networking technologies, two-way data sharing, and even weapons employment enables a level of assessment and technological refinement for continuous modernization which is a natural extension into the world of AI and machine learning.

Averna explained that AI is increasingly becoming a large part of the progression of the simulation technology, as it will allow for computer systems to gather and organize otherwise disparate pools of information, perform analytics, and transmit relevant, time sensitive data in applicable timeframes to either autonomous command unmanned systems or to reduce the cognitive burden for manned platforms.

“AI will take us in the future to where we are leveraging all of the data we are bringing together from the LVC environment. As an example, we can tailor the construct to behave in a more threat representative manner, so aircrew will start acting and reacting more appropriately to what might be expected from a real fight,” Averna explained.  Preparing for the “real fight” in the most specific, accurate, and realistic way is crucial given the pace of technological progress and the extent to which AI continues to inform air warfare operations ranging from dogfighting and targeting to rapid decision-making and sensor data fusion.