Could This Be The Beginning Of The End For Iran's Regime? 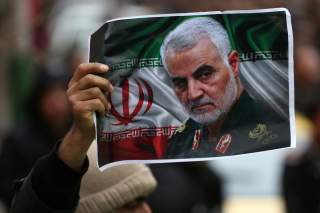 Key point: Protests have been wracking Iran as its economy falters.

The events of the last few weeks in Iran indicate that the country may be in for a repetition of the events of 1978 that led to the toppling of the Shah. Anti-government protests in Iran have reached a boiling point with the streets of several of Iran’s cities and towns reverberating with slogans demanding the overthrow of Supreme Leader Ayatollah Ali Khamenei. One can hear echoes of the “Death to the Shah” slogans of 1978–79 in these frenzied chants. Security forces have repeatedly opened fire, killing people by the dozens—possibly by the hundreds—in order to disperse protestors just as they did in the autumn of 1978.

Iran’s economy is in a tailspin, which is what triggered the protests. It is in far worse shape today than was the case on the eve of the Shah’s fall when there was a severe economic downturn because of economic mismanagement and misdirection despite the oil boom of the 1970s. The economic distress of the late 1970s was intimately related to the crony capitalism of the Shah’s regime that hurt the traditional merchant class, symbolized by the “bazar,” as well as the newly developing middle class. It was no coincidence that the religiously observant bazaris bankrolled the movement led by Ayatollah Ruhollah Khomeini that overthrew the Shah.

The resemblances of the situation today with the last years of the Shah’s rule are uncanny. The economic distress is in part the result of the economic sanctions, especially on the sale of Iranian oil, imposed by the United States since May 2018. Oil is the lifeline of the Iranian economy and accounts for a quarter of the country’s GDP and contributes about three-quarters of Iran’s public revenue. With oil exports slashed from 2.45 mbd to 0.26 mbd in the past year, the Iranian economy has gone into a severe recession. World Bank projections for 2019 indicate a negative growth rate of minus 8.7 percent in its GDP. The Iranian currency has fallen precipitately since the reimposition of sanctions with the unofficial rate plummeting to 135,000 to one U.S. dollar, thus adding to the financial woes of the Iranian public.

According to the World Bank, “Higher import prices from the devaluation are expected to push inflation back above 30 percent in the coming years as inflationary expectations spiral and consumer sentiment falls leading to once again a period of stagflation for Iran. Despite the depreciation and drop in imports, the reduction in oil exports is estimated to almost eliminate the current account surplus which is lower than the earlier sanctions episode as oil prices are almost half of the levels they were in 2012/13–2013/14. The economy’s downward trajectory is also likely to put further pressure on the labor market and reverse recent job creation gains.”

Crony capitalism with religious foundations controlled by the regime, and especially by the IRGC, controlling a large part of the economy and monopolizing certain crucial sectors has added to the people’s economic woes especially since their combined budgets of these foundations account for over 30 percent of central government spending that benefits a small segment of the elite. Additionally, according to World Bank estimates, the unemployment rate was over 12 percent as of April-June 2018 with youth unemployment over 28 percent in June 2018. One can reasonably expect this to have climbed higher with the reimposition of economic sanctions in May 2018 that has had a tremendous negative impact on the Iranian economy.

One of the byproducts of the Iranian economic downturn was the decision in November to increase the price of gasoline on an average by 50 percent. The Iranian public had become accustomed to a heavily subsidized price of oil and its sudden increase by such a hefty margin acted as the trigger for the protests that broke out almost immediately following the announcement of this decision. However, these economic woes build upon the frustration generated by political repression.

The current protests, as distinct from those of 2009 following the regime-engineered re-election of President Mahmoud Ahmadinejad, have been spontaneous and largely leaderless. No faction of the regime has been involved in the current demonstrations and thus they cut across the hardline-moderate divide. They also cut across class and ethnic divides with people of all classes joining in the protests and different ethnic groups—the majority Persians as well as the minority Arab population of Khuzistan—participating as well. Initially largely motivated by economic factors they have now taken on major political overtones demanding the removal not only of Rouhani and his government but of the supreme leader and the coterie of clerics around him as well.

The response of the regime’s security forces has been swift and brutal with hundreds of unarmed protestors shot down in cold blood reminding observers of the events of 1978 in the lead up to the fall of the Shah. It seems that this brutality has had the effect of galvanizing the opposition to the regime just as it did in 1978, thus perpetuating the cycle of violence and resistance that reminds one eerily of the months preceding the Shah’s fall.

The major unanswered question now is: Will the current protests have the same result as those of 1978 or will the regime be able to suppress them with the use of brutal force? It is difficult to answer this question with any degree of certainty especially because of a near-total news blackout imposed by the regime. The forces at the regime’s command are not only well trained in suppressing dissent, but they are also ideologically committed to the system of clerically-dominated rule. Moreover, their commanders realize that the fall of the mullah-dominated regime could mean not only an end to their power and perks but to their physical existence as well. This is the lesson they have absorbed from the fall of the Shah, which led to the systematic decimation of the officer corps that had been loyal to him. They know they are fighting for their lives and not just for the perpetuation of clerical rule. This explains in large part the ferocity demonstrated by the regime’s security apparatus in suppressing the demonstrations.

This means that the regime is likely to survive in the short term, but only in the short term. Its legitimacy has been irreparably damaged by the disproportionate and brutal use of force that it has unleashed on largely unarmed protestors. Hardly anyone in Iran now buys the argument that the governing powers—hardliners and moderates alike—are either defending Islam or the country against foreign enemies. Furthermore, unlike in earlier periods of turmoil, the regime does not have the surplus economic resources to buy off dissenters by offers of subsidies, a practice that the regime had engaged in time and again when oil prices remained high and the volume of oil exports was high as well. The drastic fall in the volume of oil exports has removed the financial buffer on which the government had depended earlier for its survival.

The regime may be able to survive this round of protests and demonstrations but both its legitimacy and its ability to hold on to power have been severely damaged, eroding almost beyond repair its capacity to manage future rounds of protests. There may not be a repetition of 1979 this year, but the protests have surely paved the way for its reprise in the not too distant future.

Mohammed Ayoob is University Distinguished Professor Emeritus of International Relations, Michigan State University, and a senior fellow for the Center for Global Policy. His books include The Many Faces of Political Islam and, most recently, Will the Middle East Implodeand editor of Assessing the War on Terror. This first appeared earlier in 2019.