Could This Be How China Finally Seizes Taiwan? 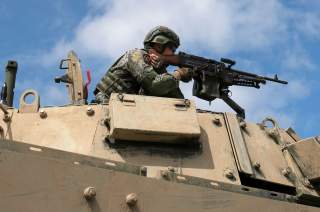 Key point: Washington has been studying how China might invade Taiwan and there are four options Beijing faces.

A Pentagon report from 2014 lays out China’s military options for invading Taiwan. And while a huge amphibious assault is one possibility for “reunifying” Taiwan with mainland China, Beijing’s burgeoning arsenal gives it plenty of other options.

The invasion analysis is part of the latest edition of the Pentagon’s annual report on China’s military capabilities and strategy. It doesn’t just reflect an assessment of China’s military options. It also reflects how the U.S.—which could in theory go to war with China in order to stop an invasion of Taiwan—views the advantages and disadvantages of those options.

China could starve out Taiwan, which imports much of its food and fuel. Beijing could compel ships to stop in mainland ports for inspection. Or, the Chinese Communist Party could declare the waters around Taiwan to be live-fire training zones, discouraging ships from entering, just as it did in 1995.

“China today probably could not enforce a full military blockade,” the Pentagon concludes. “However, its ability to do so will improve significantly over the next five to 10 years.”

China could unleash cyber-warfare or raids by Special Operations Forces “against Taiwan’s political, military and economic infrastructure to induce fear in Taiwan and degrade the populace’s confidence in the Taiwan leadership.”

There are actually a couple of options here. China is currently capable of grabbing, with little overt preparation, Taiwanese islands such as Pratas, Itu Aba, Matsu or Jinmen, according to the Pentagon’s assessment.

Or the Chinese could simply launch an all-out seaborne assault to seize a beachhead and eventually take over the whole of Taiwan proper. But international condemnation, combat attrition and urban warfare and counterinsurgency in Taiwanese cities could make the attempt risky.

In fact, all of these options carry political risks for China in terms of international political and economic pressure. Some sound like they could backfire.

Given that attempts during World War II and Vietnam to bomb enemy populations into submission not only failed, but often solidified popular support for the target government, a Chinese bombardment of Taiwan’s cities could harden Taiwanese determination to resist reunification.

But there’s another interesting aspect to this report. While the Pentagon says its analysis is based on publicly available Chinese documents, these four options seem to be essentially American. Blockade, missile strikes and limited and full-scale invasions have been U.S. practice since 1945 everywhere from Cuba and Iraq to Panama and Afghanistan.

Which doesn’t mean China won’t use them. But one wonders if Beijing may devise a more creative solution to its Taiwanese “problem.”

Michael Peck is a contributing writer for the National Interest . He can be found on Twitter and Facebook. (This first appeared in WarIsBoring in 2014.)