This Could Be Iran's Next Ruler (Or King?) 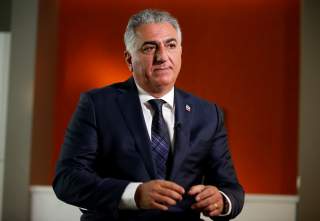 Key point: Pahlavi’s vision is one of nonviolent resistance to Iran’s clerical regime.

Over the past few weeks, the Trump administration has turned up the heat on Tehran. Way up. As part of a “maximum pressure” campaign aimed at curbing the malign international activities of Iran’s ruling regime, the White House has dramatically intensified sanctions, blacklisted the country’s clerical army, and put foreign buyers of Iranian crude on notice that they need to pull out of the Iranian market or face potentially catastrophic consequences.

But to what end? President Donald Trump has said repeatedly that he would be willing to negotiate a new framework agreement with Iran’s ayatollahs to replace the 2015 Joint Comprehensive Plan of Action and do so without preconditions. That may indeed happen, if Iran’s ayatollahs agree to come back to the diplomatic table. But the massive economic and political pressure now being placed on Iran by the United States could lead to another outcome as well: a collapse of the current Iranian regime. That raises a key question for policymakers: if the United States does indeed succeed in causing a fundamental transformation in Iran, then what should come next?

In this conversation, one personality looms exceedingly large. That individual is Reza Pahlavi, the former crown prince of Iran, who is now the most prominent leader of the secular democratic opposition to the Islamic Republic. Pahlavi was just a couple of years away from inheriting the throne in Tehran when his family was ousted from power by the Ayatollah Ruhollah Khomeini’s Islamic Revolution in 1979. In the half-century since, the crown prince has used his perch in exile (first in Morocco and more recently in the Washington, DC suburbs) to publicly oppose Iran’s clerical elite and articulate a different path forward for his homeland.

Today, Pahlavi remains relevant and highly influential in many Iranian expatriate circles, as well as on the Iranian “street,” which is where pro-Pahlavi slogans have figured prominently in the protests that have taken place throughout the country since late 2017. But he is less relevant among U.S. policymakers and experts, who—though they undoubtedly know his name—generally have little familiarity with his vision.

Pahlavi and his supporters are seeking to change that. Of late, as America’s contentious relationship with Iran has once again begun to make headlines, they have redoubled their efforts to engage in earnest with the Washington Beltway. In meetings with various think tanks and assorted policy groups, the crown prince has laid out in detail his ideas about the future of Iran and its place in the world.

Pahlavi believes that the United States faces a binary choice in its Iran policy. The United States can either pursue the “status quo”—the best variant of which envisions achieving some measure of behavioral change from Iran’s current leadership—or it can throw its weight unequivocally behind the need for a new regime in Tehran. The path that Washington chooses will have a profound impact on a range of issues, from the “nuclear file” to bilateral relations to Iran’s position in (and disposition toward) the Middle East, Pahlavi argues.

Here, the desires and aspirations of Iran’s population matter a great deal. According to Pahlavi, those have changed significantly in the decade since the Green Revolution of 2009. Back then, there remained some semblance of “loyal opposition” which sought reform of the Islamic Republic rather than its total dismantlement. (Both of the titular leaders of the Green protests, Mehdi Kharroubi and Mir-Hossein Mousavi, belonged to this camp, despite their revolutionary credentials.) Today, by contrast, Iranians are overwhelmingly united in their desire for a fundamental change in government, as ongoing protests against the Iranian regime make abundantly clear.

But, Pahlavi laments, America is basically alone in its fight against the Iranian regime. Europe is both too craven and too mercantile to take a principled stand against the ayatollahs. Russia, meanwhile, serves as the “biggest nemesis” of real meaningful change in Iran, with the Kremlin maintaining a deep and abiding stake in the perpetuation of the Islamic Republic, which has become a key strategic partner. However, he maintains, the United States does have an ally in the Iranian people, who are willing to withstand sanctions and economic hardship as long as they perceive that the United States has a long-term strategy to bring fundamental change to the country.

The biggest challenge facing the Iranian opposition, Pahlavi believes, is the “fear of the unknown” generated by discussions of regime alternatives. To ameliorate this, the Iranian opposition needs to create a “roadmap” for political transition, as well as some sort of apolitical organization to anticipate future problems and offer up solutions. There appears to be preliminary movement in this direction on the part of Pahlavi and his supporters in the form of a new, apolitical initiative known as the “Phoenix Project,” which is designed to bring the various strains of the opposition closer to a common vision for a post–clerical Iran.

Pahlavi likewise believes that core elements of the regime—including elements of the standing army and the religious military, known as the IRGC—are not consolidated around the status quo, and can be nudged in the direction of regime change provided that 1) a clear “exit strategy” is articulated, so they know what they’re getting into, and 2) that at least some of their equities (economic and political) are protected under the new order. To do so, Pahlavi argues, the United States should focus on targeted measures such as asset freezes and travel bans as a way of targeting regime leadership and elites. This would, in his estimation, send a strong signal to the Iranian people that the United States is paying attention and “knows who the bad guys are,” and also help to generate cleavages within key regime institutions (such as the IRGC).

Then there is the “nuclear file.” Although he doesn’t rule out that a future Iranian government might want to be a nuclear power, Pahlavi argues that such investments for a successor government—at least in the near term—would be foolish and wasteful, detracting from the necessary institution building and economic stabilization that the country desperately needs. And over the longer term, he maintains, the question of regime character should be the governing factor in how the international community deals with the issue of Iran’s nuclear ambitions. After all, as Pahlavi puts it, “It’s not the gun. It’s the finger on the trigger.”

Fundamentally, Pahlavi’s vision is one of nonviolent resistance to Iran’s clerical regime. He forcefully rejects the idea that ordinary Iranians should take up arms against the ayatollahs, and instead believes that it is possible to create a “controlled implosion” through nonviolent means which would bring new leadership to power. In this process, the crown prince sees himself as something resembling an “honest lawyer”—a gray eminence that could throw his substantial gravitas behind the nascent institutions of a post–theocratic Iran. However, one gets the sense that, if asked to rule, Pahlavi would probably not be averse to the idea.

All of that, however, remains purely conceptual. For the moment, Pahlavi’s message is that the United States needs to fundamentally change how it thinks about Iran. As he sees it, there is no substitute for seriousness on the part of America’s leaders. And if such seriousness does in fact manifest itself, then the crown prince is confident that the United States will find no shortage of allies on the Iranian “street.”

Ilan Berman is senior vice president of the American Foreign Policy Council in Washington, DC. This is the first installment in a series of feature articles exploring the beliefs, ideas and values of different factions within the Iranian opposition. This first appeared last year.