Could Boris Johnson Have Been a Second Churchill? 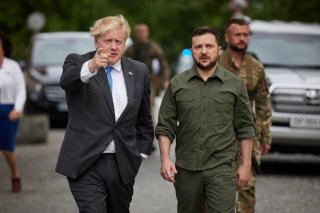 British prime minister Boris Johnson’s resignation from office nearly two months ago marked the end to what was undoubtedly a tumultuous premiership, which finally collapsed after bearing the brunt of a worldwide pandemic, an upcoming recession, numerous scandals, and various crises on the international scene. However, beneath the power struggle currently engulfing Westminster lies a more fundamental question. Who will now assume the mantle of leadership on the world stage that Johnson demonstrated a flair for but has now relinquished?

For all his personal faults, Johnson proved to be an adept navigator of British interests abroad. In 2019, he handled Brexit with sheer bravado and aplomb, delivering on his promises to disgruntled Tory voters exhausted with the high-handedness of bureaucrats in Brussels. While he may have accepted a watered-down version of Brexit, Johnson was also canny enough to avoid alienating his European counterparts since he recognized the historic significance of Britain’s role as a power-broker on the European continent. Left-wing outlets ridiculously hail the triumph of Brexit as the victory of a dark form of right-wing populism that threatened to undermine liberal democracy across Europe. Ironically enough, however, Britain’s detachment from the European Union (EU) allowed Johnson to pursue a more independent policy toward the Russo-Ukrainian War and other global issues in which the cause of democracy was threatened. Johnson’s willingness to confront Russian leader Vladimir Putin stands in stark contrast to the lackluster responses offered by the leaders of other Western countries.

Furthermore, the personal relationship that Johnson forged with Ukrainian president Volodymyr Zelenskyy testifies to the charismatic appeal of his statecraft. In a phone call with Johnson, Zelenskyy himself said, “We have no doubt that Great Britain's support will be preserved, but your personal leadership and charisma made it special.” Johnson’s first visit to Ukraine in April to shore up the resolve of the outnumbered Ukrainians further cemented the durability of the Anglo-Ukrainian bond. Ukrainians now perceive Johnson as an ally and friend and have lamented his resignation as a blow to Kyiv’s cause. Furthermore, Johnson always followed through on his promises with actual action. To date, Britain has supported the Ukrainian government with arms and funds to a much greater extent than anything offered by Ukraine’s other European allies. In a telling and eerie pronouncement, according to Reuters, the Russian government welcomed the news of Johnson’s resignation.

Even in regard to the Asia-Pacific scene, where Britain is less active, the Johnson government grasped the importance of a united Western front against China. In 2020, it laudably disentangled itself from various business arrangements with Chinese companies that maintained deep ties to the ruling Chinese Communist Party. In 2021, the British government, in conjunction with several other countries, dispatched several naval vessels to challenge Chinese encroachments in the Indo-Pacific. Furthermore, the Johnson government offered citizenship to all Hong Kong residents who wished to flee Beijing’s increasingly authoritarian behavior in the region.

In time, the British people may come to regret their choice to exchange the devil they know for one they don’t. Whoever accedes to the premiership will likely pursue the current foreign policy course set by Johnson even as they publicly disparage him. Of the two contenders aspiring to succeed Johnson, only Liz Truss has the necessary foreign policy experience to assume the premiership. Rishi Sunak is primarily a domestic player who lacks the qualifications to properly represent Britain internationally. However, neither of these candidates possesses the gravitas that Johnson brought to the table as the arch-visionary who brought about Britain’s exit from the EU. In The Churchill Factor, Johnson, subtly depicting himself as another Churchill in the making, wrote that the great statesman was proof that one leader could affect the currents of history. If only he had not been prematurely robbed of his walk with destiny, Johnson may have proven himself a worthy heir to Churchill’s legacy.

Neil Banerji is a graduate student at the University of Oxford and an editorial intern for The National Interest.