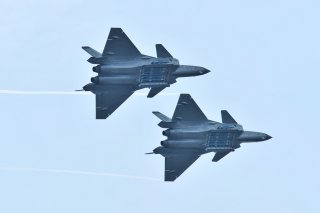 The People’s Liberation Army Air Force J-20 fighter may eventually be equipped with laser weapons, according to a story published by the Chinese government-backed Global Times.

The Global Times quoted Wang Mingliang, a “Chinese military expert who spoke on a China Central Television (CCTV) program.” The story includes few specifics about a timeframe for the J-20 to field a laser weapon or any information on testing and development.

Lasers are an excellent tool for aerial interception because they shorten reaction time, but they do require a large amount of energy to be effective. That creates issues for mounting them on an aircraft.

To mount a laser weapon on a fighter jet, the aircraft requires a large source of power that can be scaled when necessary. If a large energy source can be mounted on a fighter jet, then laser weapons may be realistic for the J-20. There are still questions about how soon that can happen, though. The U.S. Air Force Research Laboratory (AFRL) has been working on this issue for many years.

The U.S. Air Force has already carried out successful ground testing. The next step may be to mount lasers to larger aircraft such as a C-130. Using a cargo aircraft for airborne testing would allow the ARFL to experiment and refine the technology before applying it to a fighter aircraft.

There would still be challenges, though. A laser weapon may decrease the stealth ability of some fifth-generation fighters. To maintain stealth characteristics, the laser and its power source may need to emerge from an internal weapons bay to ensure that no protruding structures generated a strong radar return signal to enemy defenses.

The F-35 Lightning II may eventually fire laser weapons as well. Developers will continue work on creating a power source for those weapons on the F-35 in coming years.

Laser-armed fighter jets could introduce an unprecedented combat advantage in the future. Laser weapons travel at the speed of light and are quiet, meaning they could fire without giving away an aircraft's location amid incoming fire. Lasers are also scalable, so fighter jets could achieve specific desired effects on a target ranging from simply disabling an enemy system to prevent them from using it, or completely destroying a target if needed.