Could China Help Ignite a Second War over the Falkland Islands? 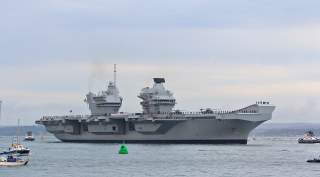 The British Royal Navy's (RN) amphibious assault ship HMS Albion is on a four-month tour of Asia and was recently harassed by Chinese ships and aircraft in an August 31 South China Sea encounter. No doubt wanting to convey displeasure at the United Kingdom's presence in Asia, the on September 6, Sina.com provided an unsubtle reminder that China could once again try to rearm Argentina to the point it may be tempted to ignite a second war over the Falklands Islands.

However, Argentine Navy’s small number of obsolete Super Entendards—constituting its only current respectable combat aircraft capability—have no chance of surviving against the four Royal Air Force (RAF) Eurofighter Typhoon 4th generation fighters stationed in the Falklands. Rather, what is crucial is that China could equip Argentina to take on the RAF and the RN, and was just starting to do so in 2014 to 2015. In 2013, Argentine aircraft industry sources told this analyst of ambitions to co-produce the $35 million Chengdu Aircraft Corporation (CAC) FC-1/JF-17 lightweight fighter, while a source interviewed at Chile’s February 2018 FIDAE airshow stated that an initial deal would have included twenty-four FC-1s.

Though about the same size and performance as South Korea's Korean Aircraft Industries TA-50, its low price has not led to expected sales success, most likely due to its lacking an indigenous Chinese turbofan engine which remains in development. But the FC-1 has impressive potential. For instance, it will soon feature a new Chinese-designed active electronically scanned array (AESA) radar, and is already equipped with the 400km range, hypersonic speed China Aerospace Science and Industry Corporation (CASIC) CM-400AKG attack missile. Pakistani sources also say a guided anti-ship version of the CM-400AKG is under development. If it emerges, this could become the new "Exocet" that could pose a threat to the HMS Queen Elizabeth, even with its Lockheed-Martin F-35B fifth-generation fighters.

In addition, China was seeking to sell the previous Argentine administration of Cristina Fernandez de Kirchner up to five anti-ship-missile-armed corvettes and up to 110 co-produced Norinco amphibious VN-1 8x8 infantry fighting vehicles. If these sales were successful, it is plausible they could have led to further sales of fighters, new submarines, and perhaps the ZTL-11, Norinco’s 105mm gun-armed amphibious wheeled-tank development of the VN-1.

Throw in some short-range ballistic missiles, which China has been marketing in Latin America since the start of this decade, and both London and Washington could be looking at a potentially more dangerous Latin crisis. First, there is China’s new space tracking and control base in Argentina’s Neuquen Province, which Latin sources indicate may include a quid pro quo whereby Argentina gains access to strategic intelligence from China’s space assets. This would allow Argentina or its allies to organize attacks against British, or possible supporting U.S. forces, along the lengths of their long deployments. Second, a new Falklands War might elicit active support from Argentina’s neighbors, forcing Washington to choose between its old ally and its younger Latin partners. Third, by the time Argentina assembles a new Chinese supplied force, two or more People’s Liberation Army Navy (PLAN) aircraft carrier battle groups might be ready to lend support.

By enabling a war leading to an Argentine victory, or by even forcing London into a long surrender, Latin America would enter a new historic period in which Beijing's strategic preferences may begin to displace those of Washington. However, Washington and London have been fortunate in that Argentina's unstable politics and economics have stymied China's ambitions. But it was this very instability that helped to lead Argentina to war in 1982 and was also behind the latest military outreach to China by Fernandez-Kirchner. While the government of President Mauricio Macri, elected in December 2015, soon quietly dropped the ambitious arms purchases from China, an Argentine report from early July indicates that a Chinese delegation may visit to resume such discussions in September. There have been no subsequent reports of such a visit.

To its credit, the Trump Administration has begun to openly confront China’s challenge in Latin America, in contrast to Obama Administration’s reluctance to do so, even as its second term saw China’s first attempt to arm Argentina. However, the Administration is starting late following China’s decades of building dominant commercial positions in many Latin and Caribbean states, plus its ladling of $200 billion in investment capital in the region. This will be enhanced by China’s Belt and Road Initiative, which Assistant Secretary of Defense for Asia and the Pacific Randall G. Schriver said is a “key feature,” for “..expanding Chinese military bases and access to foreign ports around the world….”

But removing the temptation for Argentine leaders to turn to China to enable new military adventurism may require positive and negative incentives. U.S. officials should warn Argentines publicly that the Chinese space tracking facility in Neuquen also enables China to wage war against the United States. There must also be a new effort to develop affordable weapons that can compete with inexpensive Chinese options like the FC-1, as Latin states should be encouraged to recognize Taiwan's democratic accomplishments and rebuff Chinese efforts to slight its interests. While finding an all-around positive and face-saving solution to the Falklands conflict will test Washington's leadership capacities, it must engage, or China will pursue its Argentina option.

Richard D. Fisher, Jr. is a senior fellow with the International Assessment and Strategy Center and author of China’s Military Modernization, Building for Regional and Global Reach, Stanford, 2010.