Could Climate Change Cause the Next 'Great Recession'? 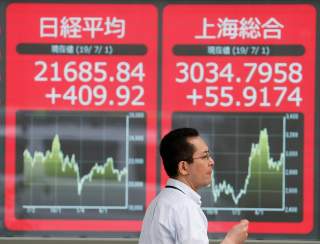 After a quarter of a century of nations from around the world coming together to discuss progress in dealing with climate change, emissions are still rising. The 25th annual United Nations climate change summit is now underway – and for the sake of the planet, it’s high time it changed its approach.

While climate scientists, policymakers and environmental campaigners have been engaged in a decades-long conversation about the future of the planet, most people on planet Earth see no climate emergency. Put bluntly, the science of global warming has failed spectacularly to emotionally connect with much of society, particularly those in the most powerful positions – rendering policymakers ineffective despite repeated warnings.

The science and the warnings focus on curtailing the emission of heat-absorbing gases into the atmosphere that, left unaddressed, may threaten the viability of contemporary society and worsen a mass extinction event already in motion.

But these warnings are not connected with complex human systems, such as food, finance and logistics, leaving them to evolve as if climate change didn’t exist. Terms such as “tipping points” are on their own technical, distant and abstract, while humans are wired to prioritise the short-term.

This failure to connect the dots means humanity has rapidly entered uncharted territory, pumping out carbon ten times faster than at any point since the extinction of the dinosaurs.

So while climate scientists must continue to improve their understanding of a rapidly changing Earth system, what we really need now is to hear from experts who understand the human systems contained within, and how intertwined with the climate their fate is. The new story of our planetary emergency must highlight our vulnerability to near-term climate shocks, and offer a corresponding vision of a more urgent global response.

Cascading tipping points in the Earth system – such as melting ice sheets and forest collapse – may be existential long-term threats. But we’re already causing increasingly extreme weather events that may soon become severe and frequent enough to cause what’s called “synchronous failure”.

This is where multiple stresses across human-made systems lead to catastrophic collapses in their functioning. These collapses, given how interconnected our global system is, can affect one country directly but lead to the failure of our finance systems or global supply chains in many others. To paraphrase English poet John Donne, no country is an island when it comes to shielding itself from collapses in other countries.

Take the global financial crisis in 2008. Following financial deregulation, banks started to create money which was used for mortgages, leading to house prices rising faster than wages. This bubble in the housing market was not sustainable and too much debt in the US and Europe led to the collapse of major financial institutions.

This collapse threatened the whole banking sector, leading governments to bail them out. In turn, economies stalled, governments borrowed, and austerity was born – the effects of which are still being felt today.

Our climate is now what unscrupulous banking was then.

Think of the global economy as a never-ending game of tile-matching video game Tetris, where the movement of cargo ships, trains, lorries and planes gently fits together in an orderly sequence. This is made possible thanks to efficient logistics, where everything arrives “just in time” to minimise costs and maximise profit. It’s why your local supermarket has evolved to not require a small warehouse at the back.

The problem is that this just-in-time economy has been designed around assumptions of a stable world, in which an action always leads to a simple and predictable outcome. But it now sits on top of a hugely unstable and complex platform – our physical world, increasingly disrupted by climate change. In other words, no more smooth-running Tetris.

We are already experiencing this unstable platform. Droughts and heat have reduced global cereal production by 9-10%. The onion harvest was so compromised in 2018 that Latvia declared a natural disaster, and Lithuania a state of emergency. In Syria, an intense three-year drought contributed heavily to a crash in food production, which combined with other complex pressures to bring about the country’s collapse.

In the future, food shocks are likely to get much worse. The risk of multi-breadbasket failure is increasing, and rises much faster beyond 1.5℃ of global heating – a threshold we could hit as early as 2030 should emissions continue unchecked. Such shocks pose grave threats – rocketing food prices, civil unrest, major financial losses, starvation and death.

Heading into the unknown

The most worrying thing about all of this is that compared to long- and medium-term climate models, we know relatively little about just how fragile the various parts of our clockwork global economy are in the near-term. By the UN’s admission, for example, the way we model the effects of crop failure is no longer viable. We urgently need to better understand how our human systems will respond to shock events, which will occur with ever more frequency and severity as the climate destabilises further.

Above all, much more prominence must be given to experts in systems, food security, migration, energy transitions, supply chains and security, to develop our understanding of short-term responses within society. In particular, we need a better handle on how trigger events such as food price spikes, droughts or forest fires, overlay onto the most vulnerable and politically unstable countries.

As for our response to these locked-in threats, we must ask more immediate questions than what sort of society we want in the future given that we may have already lost control of the Earth’s climate. We need to treat people as citizens and not consumers, as active participants in the shaping of how our near future navigates impending climate shocks. And with those least culpable and least prepared most in the firing line, international justice and equity must be at the forefront of these discussions.

These are not distant existential issues raised by uncertain and abstract models of future climatic risk. They are urgent questions that humanity has been ducking for decades, but now demand urgent answers.