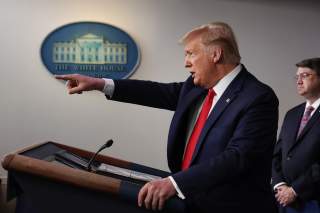 The Trump administration’s mishandling of the coronavirus crisis has been widely condemned by health experts.

But if the administration’s bungling proves costly to Trump in the November election, it will be an exception to the historical rule that epidemics haven’t led to political unrest or governments being voted out of office.

Some kinds of health crises do have political consequences: Hunger has toppled governments. From the French revolution to the Arab Spring, food shortages have routinely caused riots and occasionally sparked revolutions. In the case of starvation, political cause and personal result are intuitively clear to those suffering: My family has gone hungry because the government has failed to ensure there’s enough food.

By contrast, epidemics cause social confusion and often cause far-reaching societal changes. The medieval plagues transformed Europe’s agrarian economies from intensive-cultivation farming systems to economies more reliant on livestock, because the high death rate suddenly made labor more valuable while much cultivated land was turned over to pasture for sheep and cattle. Smallpox, carried to Mexico by infected Europeans, played a decisive role in enabling the Spanish to conquer that country in the 16th century.

Modern history records no instances of an epidemic toppling a government. Disease is usually seen as personal rather than political, and each new pathogen has an unfamiliar and uncertain epidemiology. That’s not a recipe for revolution.

Starvation helped drive the popular unrest that led to the collapse of Imperial Germany in 1918. The 1918-1919 influenza pandemic killed more people than famine and war combined over that murderous decade, but it features only as a footnote to the political history of that tumultuous era.

In the U.S., the influenza caused panic, but in his wide-ranging book on the pandemic, John Barry concluded that “the fear, not the disease, threatened to break the society apart.”

I have researched famine and epidemics in Africa over 30 years, including setting up the United Nations Commission on HIV/AIDS and Governance in Africa.

The HIV/AIDS epidemic in South Africa in the early 2000s cut life expectancy by a third at the turn of the millennium. South African President Thabo Mbeki’s denial that HIV caused AIDS sparked outrage in the country and internationally, and led to mass demonstrations by the Treatment Action Campaign, among others. But neither the epidemic nor the mishandling of it ever imperiled Mbeki’s party’s grip on power.

Ethiopian Emperor Haile Selassie was deposed in late 1974 after the disastrous famine of 1973 led to economic chaos, industrial strikes and mutiny among the armed forces. STAFF/AFP via Getty Images

By contrast, famines brought down governments in Ethiopia and Sudan in the 1970s and 1980s.

The Chinese government’s slow and secretive response to the first outbreak of SARS in 2003 was widely criticized. But the leadership didn’t pay a political price for those public health policy failures – and it has now repeated the mistakes with the 2020 coronavirus.

Learning as they go

One reason why the coronavirus might stick to the usual pandemic script is that the course of this pandemic, as with others, is fundamentally unknown. There are no reassuring certainties.

The Centers for Disease Control and Prevention insists it is spreading facts, not rumors. It provides sound advice for how people can minimize the risk of infection through practices such as hand-washing and social distancing.

However, the science does not dictate a single evidence-based course of action for the government. Forecasts for the path of the epidemic depend upon assumptions that are unproven and data points that are, as yet, unknown.

Until there are good measurements of the numbers infected, the rate at which each infected person infects others and the timing of the disease cycle, the range of outcomes for different policy choices cannot be known accurately.

Epidemiologists are learning as they go; their forecasts will change.

In the meantime, public health experts find it difficult to communicate uncertainty to the public, which is why the CDC playbook insists that political leaders should be early, clear and consistent in their messaging – keeping the epidemiologists out of the media spotlight. Because there is no single and authoritative scientific story that can be told.

For example, in the early days of the 2013-14 Ebola epidemic in West Africa, internationally recommended best practices for treatment did not include keeping patients hydrated through drinking lots of water.

Folk theories around the coronavirus, some of them useful local experiences and others harmful conspiracies, are already spreading as fast as the virus itself. Some are self-evidently dangerous, such as the belief that Africans can’t get infected, or that it is no more deadly than flu.

President Trump’s practice of putting personal opinions on a par with scientific expertise creates an environment in which rumors and conspiracy theories can flourish – and some will resonate with many Americans, particularly those already distrustful of expert government institutions.

The pandemic may lead some to favor, or continue to favor, conservative politics – further advantaging Trump – because the circumstances of the coronavirus’s spread easily feed an isolationist ethic. Stories such as how the Colorado town of Gunnison escaped influenza in 1918-19 by cutting itself off from the rest of the world will resonate.

Isolationism fits neatly with the origins of the coronavirus, which emerged on the other side of the globe and spread rapidly because of international air traffic. It’s a pandemic of globalization.

Italian police officers man a roadblock in Milan, Italy on March 16, 2020. Italy is on a nationwide lockdown to contain the COVID-19 virus outbreak. AP/Luca Bruno

And the battle against the virus can take the form of social control measures that would be completely unacceptable in normal times. Now such actions are socially accepted or state-imposed. The best-tested measures for public health are quarantine, exclusion zones and restrictions on travel. Alongside its high-tech surveillance capacities, China has relied heavily on old-fashioned neighborhood policing to enforce its lockdown. In Europe, authoritarian control measures are now widespread.

Crisis, confusion and fear are an opportunity for politicians to enact measures that would normally be regarded as beyond the pale.

Italian police are enforcing the 24-hour curfew. Israel is using surveillance technology designed to track terrorists to monitor individuals suspected of being carriers of the virus. These measures echo authoritarian, isolationist and xenophobic themes held by conservatives – broadening their focus to China and Europe and East Asia alongside the targets of recent exclusionary policies such as Mexico and Africa.

The White House response has been a textbook case of doing the opposite of everything recommended in the CDC epidemic guidance book. But that may not have a political cost; Trump’s approval rating “is statistically unchanged from a month ago,” according to an NBC News/Wall Street Journal poll.

If Trump suffers at the ballot box in November on account of the pandemic, that will make history.