Could Coronavirus Bring a Surge in South Asian Terrorism? 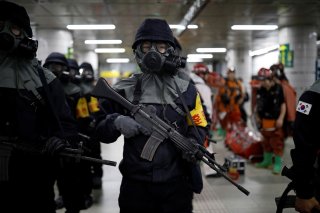 The ongoing Covid-19 pandemic and its tragic consequences have taken the news spotlight. Terrorism, once the top news topic appears to have taken a backburner in Southeast Asia. Meanwhile, the United States and China continue their power rivalries which have direct repercussions for Southeast Asian states. Despite the ongoing Covid-19 pandemic, China has approved a new Coast Guard Law on January 22, 2021, that enables its coast guard to use “all necessary means” to stop foreign ships and destroy structures build on reefs in maritime waters claimed by China. This will have serious future consequences for the South China Sea and other Southeast Asia littoral claimant states. The new U.S. administration under Joe Biden looks set to continue its strategy to contain China. Biden’s new secretary of state, Antony Blinken, has announced that China poses the greatest threat to the United States, paving the groundwork for expected rejuvenation of containment strategies against China. However, both the Covid-19 pandemic and the great power competition may drive terrorism to new levels of violence in the future that Southeast Asian states should be cautious of.

In the past few months, a number of states, including Japan, China, South Korea, and Malaysia, have imposed strict lockdowns, attempting to curb the spread of the Covid-19 virus. International travel has also been limited with airlines and cruise liners suffering a dire business decline. These strict border controls will hinder the physical movement of terrorists and result in them laying low for a while. However, terrorists will take this opportunity to further exploit the usage of information warfare via cyber platforms to spread their ideology and gain more supporters via cyber social networks. Online platforms such as YouTube, Twitter, and Facebook offer terrorists free, convenient, difficult to attribute, and rapid dissemination of information as well as opportunities for terrorists to gather intelligence. Extremist messages may reach a larger audience during Covid-19 lockdowns as a lot of people surf the internet while staying put at home. Youths and schoolchildren also use the internet for online schooling while locked down in their homes, and may access websites containing terror groups’ subversive views striving to win support and gain new followers of terrorist groups. This may lead to radicalizations and the recruitment of future lone-wolf terrorists once the Covid-19 pandemic has subsided.

Terrorist groups may also benefit from the great power competition by lobbying for support and being a potential covert front to conduct disruptive operations. Terrorist groups do not usually self-sustain but are often funded or supported by foreign governments. Terror groups flourished during the peak Cold War years because funding, support, and training were allegedly provided to conduct proxy attacks. This secret support was usually conducted via covert action. The main attributes of covert action are secrecy and deniability. Covert action is usually conducted by intelligence agencies in the most clandestine and non-attributable ways—if things go wrong it can be plausibly denied. Covert action can be conducted by various means, from propaganda radio broadcasts, information warfare via social media, to more violent forms of operations such as assassinations. Covert action sometimes also involves working with various interested organizations, whether legitimate political parties or terrorist organizations.

Using the United States as an example, the ongoing domestic racial ruptures and far-right extremism can be manipulated by foreign covert action. The latest insurrection and occupation of the U.S. Capitol on January 6, 2021, by disgruntled Americans, bears testimony to the precarious nature of the U.S. domestic extremism that can be easily exploited. A peer competitor may covertly fund and support one of these groups. Combined with information, subversive activities via social media can instigate mass uprisings in the United States leading to constant domestic violence and maybe future terror attacks. Continuous violent domestic problems will distract the U.S. government, sap its resources, hamstring its foreign policies, and slowly erode U.S. global soft power and leadership.

Covert action may also be launched to support terror groups to launch terror attacks at U.S. allies or strategic partners in Southeast Asia such as the Philippines and Thailand with the strategic aim of shifting the foreign policy stance of these allies and partners. Even neutral states such as Malaysia may be targeted by covert action and terror attacks. Such terror attacks will also be followed up by massive disinformation campaigns attributing blame to the United States for the attacks. The aim is to shift their foreign policy alignments that will be detrimental to U.S. strategic interests.

It will be prudent for intelligence agencies in Southeast Asia to be vigilant in monitoring existing terrorist groups to track possible covert operations and realigning of terrorist groups with great powers. Cyber intelligence, an area where ASEAN can play a central driving role, must also be rigorous in monitoring terrorists’ attempts to spread subversive messages via the internet exploiting the ongoing Covid-19 pandemic lockdowns’ increase in internet utilization. The post-Covid-19 world in the midst of escalating great power competition may experience a resurgence of violent terrorist attacks in Southeast Asia.

Adam Leong Kok Wey is an associate professor in strategic studies, and the Deputy Director of Research in the Centre for Defence and International Security Studies (CDiSS) at the National Defence University of Malaysia. His latest book is Killing the Enemy! Assassination Operations During World War II, published by Bloomsbury (2020).