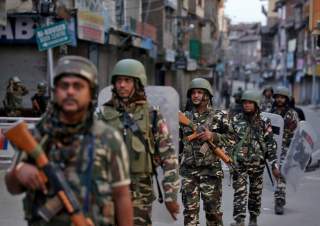 Before a recent meeting in Davos with Pakistani prime minister Imran Khan, Donald Trump reiterated his offer to help mediate over the issue of Kashmir.

It’s been six months since India revoked the special constitutional status for the disputed territory of Indian-administered Jammu and Kashmir and put the state on lockdown. While internet restrictions have eased, connectivity remains patchy and prominent local politicians are still in detention.

Khan’s administration objected to the revocation on the grounds that Jammu and Kashmir is internationally recognised as a disputed territory. It argued that India’s unilateral decision contravened UN resolutions on the conflict, the Geneva Conventions, and India’s own constitution and supreme court. Pakistan also expressed concerns about ethnic cleansing and genocide.

Since then, the Indian government of prime minister Narendra Modi has repeatedly refused to accept mediation over Kashmir, something Khan says he is open to. The question of mediation is likely to come up at a forthcoming visit to India by Trump in late February.

My ongoing doctoral research suggests that mediation by the world’s great powers – such as the US, UK, Russia, China or Turkey – to resolve the festering conflict over Kashmir could pave the way for greater security cooperation in the Pakistan-India-Afghanistan triangle.

The disputes over the line of control that separates Indian- and Pakistani-administered Jammu and Kashmir, and the Durand Line separating Pakistan and Afghanistan, are remnants of the decolonisation process. These disputes have complicated security relations in South Asia and led to lingering instability, hindering regional cooperation and integration.

Since 1989, India has deployed between 600,000 and 700,000 soldiers to Jammu and Kashmir. Alleged human rights abuses on the part of the Indian security forces have included rape, torture, extrajudicial killings, custodial disappearances, and the violent suppression of protests – one of the fundamental rights of citizens in a democracy. These have been documented in reports by the UN Office of the High Commissioner of Human Rights. In the summer of 2016, 17,000 demonstrators were injured in a brutal security crackdown. This has fuelled a further sense of marginalisation among local Kashmiris.

I’m looking at the Kashmir issue from the perspective of the English school of international relations, a theoretical approach to international affairs that emphasises countries’ pursuit of shared interests and values through common institutions, human rights and diplomacy. This theory argues that the great powers have a special responsibility to maintain security and stability in the world.

In the Pakistan-India-Afghanistan triangle, despite deep-seated conflicts, all three countries have repeatedly turned to the institutions and norms of international society to seek to resolve disputes and defuse tensions. For example, Pakistan and India have repeatedly attempted to engage in a bilateral dialogue and to share intelligence on terrorism. Afghanistan’s inclusion in the South Asian Association for Regional Cooperation (SAARC) is another example of this desire to use international institutions to defuse tensions. Such regional cooperation is a foundation upon which to build a more cooperative trilateral relationship – if the countries choose to do so.

Read more: How the Partition of India happened – and why its effects are still felt today

Pakistan, India and Afghanistan have a shared history going back to the Mauryan Empire of the fourth century BC. Ethnic and religious identities spill over borders and the common cultural heritage is rich, spanning music, food, cinema, poetry, language and spirituality.

The security threats plaguing this region are shared too. Violent extremist groups are a concern not only for India, but for Afghanistan and Pakistan too. While India repeatedly blames Pakistan for attacks in Jammu and Kashmir and other parts of India perpetrated by the Jaish-e-Mohammed and Lashkar-e-Tayyaba militant groups, Pakistan believes that India supports the Tehreek-e-Taliban Pakistan, which has caused tremendous insecurity in Pakistan over the past two decades.

It also accuses India of supporting secessionism in the province of Balochistan, which threatens the economic corridor between China and Pakistan. Afghanistan has been destabilised by the Afghan Taliban and Haqqani Network and regularly blames Pakistan for backing them.

This cycle of allegations and counter-allegations hides the fact that these terrorist groups are non-state actors who work across borders. A comprehensive counter-terrorism strategy requires security and intelligence cooperation, alongside an approach that addresses the political, social, economic and psychological factors underlying terrorism.

A first step towards unravelling the knotty security dynamic in this region could be a positive response to the American offer to mediate on Kashmir. In the absence of bilateral headway in the peace process, third-party mediation is a reasonable way of attempting to break the deadlock. The successful settlement of the dispute over Kashmir could open the way to negotiations on the other core and interlinked issue of transnational terrorism.

The Pakistan-India, Pakistan-Afghanistan, and India-China territorial disputes are legacies of colonisation. The mistrust between Pakistan and India has hampered efforts to forge cooperation in the wider South Asian region, as shown by the cancellation of the 19th SAARC summit in 2016.

If India wants to be a great power in the emerging world order, it must first achieve a peaceful and stable neighbourhood. Accepting Trump’s offer would be a step in this direction.