Could the F-35 Save Money in Warfare? The Answer Is Yes. 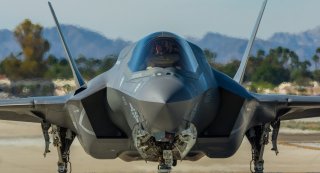 If a single F-35 can successfully accomplish a mission that it would take five to ten 4th-generation aircraft to attempt with a less clear probability of success, which is more expensive?

Certainly, the actual price per plane and especially the sustainment costs of the F-35 are quite significant. But how might they appear when placed within a broader fleet-wide context? Due to its long-range sensors, an F-35 is capable of finding, tracking, and destroying groups of enemy fighters before it is seen itself, something which has been proven in multiple wargames. What might that mean in terms of costs? Are the F-35 cost critics missing vital parts of the overall equation such as overall mission cost?

In terms of a numerical breakdown, a recent Mitchell Institute for Aerospace paper called “Cost per Effect” makes several calculations regarding the eventual or overall operational cost of an F-35 when viewed with a mind to an entire mission.

The paper says the hourly operational costs of an F-35 are in the range of $35,000, whereas a report from Defense News last year says F-15EX operating costs are roughly $29,000 per hour, and a Jane’s estimate puts F-18 hourly costs at $24,000. According to this available information, yes it appears the hourly operational costs for the F-35 are slightly higher than its 4th-generation counterparts.

However, what happens when an overall cost-assessment metric is analyzed with a mind to performance, operational use, and mission effectiveness? How do the numbers compare if a much larger number of 4th-generation aircraft were used to accomplish a mission one F-35 could perform? Would it actually make sense to float the possibility that using an F-35 could not only improve the prospects for mission success but actually save money?

A new F-35 does cost roughly $90 million dollars per plane, and operational, maintenance, and sustainment costs are all projected to be high. Yet Lockheed Martin projects and anticipates the cost of a single plane will drop massively as time goes on. The larger the F-35 buy, the lower the costs will be, a reality that is often the case with procurement.

When fewer numbers of aircraft are able to perform and sustain a mission, then the actual scope of a combat mission can massively expand. Essentially, a smaller number of well-networked F-35s might be able to perform a mission it would otherwise take twenty 4th-gen fighters to complete.

Finally, there is the cost of survivability. Of course, a price tag cannot be placed upon a pilot or human. But conducting attack missions in an F-35 is inherently much less risky than operating in a 4th-generation plane. A fourth-generation plane is much more likely to be detected by enemies and operates with a much greater chance of being shot down by advanced air defenses.