Could Green Ammonia Be a Climate-Change Killer? 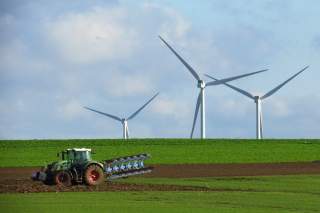 For the past 100 years, a simple molecule has had an immensely positive impact on our world. Ammonia, which comprises three hydrogen atoms bonded to a single nitrogen atom, is widely used to make the fertilizers enable us to produce enough food for everyone on the planet. That makes it pretty much the most important molecule after water.

However, ammonia manufacturing is the world’s third biggest industrial process emitter of carbon dioxide, creating half a billion tonnes of CO₂ each year – 1.8% of global CO₂ emissions.

My colleagues and I have just produced a report for the Royal Society that shows producing zero-carbon green ammonia could cut global carbon emissions by almost 2%. What’s more, it could also store nation-scale amounts of renewable energy and power ships, trains and heavy-duty vehicles.

Ammonia is commonly produced by reacting methane with steam to produce hydrogen, and then reacting this with nitrogen from the air using what is known as the Haber-Bosch process. But the steam methane reforming also gives off carbon dioxide. In contrast, green ammonia is produced with hydrogen that has been separated from water using renewable electricity.

It’s also possible to break ammonia back down into hydrogen and nitrogen, giving off energy in the process. And it can be burned like fossil fuels such as diesel. This means ammonia can also be used as an energy store.

Read more: Five ways chemicals can save the world from climate change

The Rutherford Appleton Laboratory in Oxfordshire, UK, has a unique green ammonia demonstration system. It is powered by an on-site wind turbine and capable of producing up to 30kg of green ammonia a day. It can also feed green electricity back into the grid as required.

The challenge in making green ammonia production a viable alternative is bringing down the cost, of which 85% is electricity. In most parts of the world, renewable energy is still significantly more expensive than the methane used in conventional ammonia manufacturing.

However, the cost of electricity in areas with abundant renewable potential has decreased dramatically over the past decade, to around 1.7-3.4 GBP pence per kWh. This means you can produce green ammonia for around £220 per tonne.

This still isn’t as cheap as the conventional process. But to keep using this method while reducing our emissions to net zero we would have to combine carbon capture and storage so the resulting CO₂ wouldn’t enter the atmosphere. And that’s when green ammonia can become cost competitive.

Green ammonia also has the potential to address one of the biggest unsolved challenges in the race for net zero emissions: how do we create flexible zero-carbon fuel reserves that last for years in the way current fossil fuels do?

Ammonia is easily stored in large quantities as a liquid at modest pressures (between 10 and 15 times that of our atmosphere) or refrigerated to -33°C. In this form, the energy density is around half that of petrol and over ten times that of batteries.

What ammonia has over other potential fuel alternatives is that we already have a global manufacturing and distribution system in place because of its widespread use as a feedstock for fertilisers. There is also a comprehensive network of ports that handle ammonia at large scale so it could become a fuel for long-distance shipping with relative ease.

In fact, the international shipping industry has already proven the feasibility of using ammonia as a fuel in their largest ocean-going container ships. MAN Energy Solutions, a designer and manufacturer of marine engines, has announced that the first ammonia engine could be in operation by early 2022. This would also open up opportunities for green fuels for trains, heavy-duty freight and perhaps even zero-carbon aviation.

Ammonia does present other challenges. The use of ammonia-based fertilisers contributes to global declines in biodiversity, widespread air quality problems and greenhouse gas emissions. New uses of ammonia must include effective measures to prevent any additional emissions.

Stringent controls that are already present at all current ammonia storage and relevant industrial sites, must be in place to ensure that the risks of ammonia release and the resulting formation of harmful nitrogen oxides (NOx) are negligible.

What we need to do now is to research and demonstrate the potential of ammonia, from improving wind and solar power through optimising green ammonia production and storage. And we need to develop a comprehensive portfolio of ways of turning ammonia back into power when and where we need it.