Could Hong Kong's Leader Use the Law to Stop Protests? 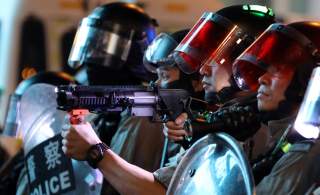 Key point: There are a lot of questions and limits over emergency powers, but that doesn’t mean Beijing won’t pressure Lam to use them.

On 4 October 2019, the head of Hong Kong’s government, Chief Executive Carrie Lam, announced she had invoked the Emergency Regulations Ordinance (ERO) to gazette the Prohibition on Face Covering Regulation (masks regulation). The regulation prohibits facial coverings ‘likely to prevent identification’ during unlawful assemblies, ‘riots’ and lawful public meetings and processions. Offenders are liable to one year’s imprisonment and fines of HK$25,000 (US$3200).

The deployment of emergency powers followed 17 weeks of mass demonstrations and unrest. The movement was sparked by the government’s attempt to introduce a law permitting extradition to mainland China. Popular demands have multiplied as the government has opted for forceful suppression over political compromise. Clashes between riot-equipped police and resourceful protesters have become a recurrent reality, the latter geared to withstand tear gas, rubber bullets, bean bag rounds, pepper spray, water cannons and batons.

The ERO gives the Chief Executive in Council unlimited power to make and repeal regulations in the event of an ‘emergency or public danger’. The law is a colonial remnant, introduced in 1922 and invoked again in 1967, but not since. It is consistent with the ‘executive-led’ nature of Hong Kong’s political system since the 1997 handover to China.

Owing to Hong Kong’s democratic deficit, political battles are frequently fought in its independent common law courts. Protesters launched an urgent legal challenge to the masks regulation, but a judge decided after limited argument that there was insufficient cause to block the regulation, given the ‘dire situation’ of escalating violence. More substantive legal challenges loom. How might the arguments run?

First, protestors may claim that the ERO is outdated, superseded or inconsistent with other laws.

The obsolescence argument has no prospect of success. Many colonial-era laws, some even more anachronistic, remain on the books. Although the ERO has not been invoked for half a century, it is specifically intended to apply in rare, exceptional circumstances.

It has been suggested that the 1991 Hong Kong Bill of Rights Ordinance (HKBORO) superseded the ERO. But the relevant HKBORO provision did not survive the handover and unlike the ERO it is no longer on the statute books.

Second, protestors may argue that the use of the ERO was unreasonable, unprecedented or beyond power.

The unreasonableness argument suggests that the Chief Executive in Council acted in a way that no reasonable administrator in her position could have. The failure of the initial legal challenge suggests that this argument is not strong.

It has been said that the Chief Executive has never enacted legislation without going through the Legislative Council and that the separation of powers demands legislative scrutiny. But subordinate legislation — the masks regulation being subordinate to the ERO and within its practically-unlimited scope — can be promulgated by the executive branch, as described in the ERO.

This line of argument is more promising. Both the HKBORO and the Basic Law, Hong Kong’s quasi-constitution, guarantee freedoms of expression, assembly and other civil and political rights. Departures from these principles must be justified: they must be necessary, proportionate and rationally connected to the achievement of a legitimate objective.

By prohibiting masks that are ‘likely to prevent identification’, the masks regulation establishes its objective to be the identification of protesters, presumably from photographic or video evidence, leading to their later arrest. This may offend necessity — there is nothing to prevent officers from arresting offenders at the scene then unmasking them.

If the regulation’s true intention is to deter protest, it is both misleadingly-framed and ineffective while directly attacking a fundamental right — all factors undermining its rationality. With the mask-wearing penalty dwarfed by the 10-year sentence for the often-spurious charge of ‘rioting’, protesters are actually incentivised to protect their identities as they protest the further empowerment of police. The immediate result was a fresh wave of clashes, accompanied by disturbing footage of riot police violently mobbing young people in surgical masks.

Should Lam formally declare a public emergency threatening ‘the life of the nation’, the HKBORO provides that the rights it describes can be suspended. But this too is subject to a necessity test and the parallel rights in the Basic Law would remain in force.

The judiciary has ruled against the government in the past, but it also avoids potential overrule by Beijing. Lam insists that the masks regulation is her initiative, but it is backed by Beijing. The courts, as in many authoritarian regimes, will be on perilous ground when determining the constitutionality of executive action.

Further emergency measures might include extending detention periods before charges are laid or legal consultation, gaining control of communications and the internet and a curfew — the curfew already de facto achieved through subway shut-downs. The creation and normalisation of a mainland-style police state are real possibilities.

Even greater than the doubts over legality are doubts as to legitimacy. Where an unconstrained political power governs by edict, that is rule by law, not rule of law. Escalating authoritarianism tramples the rights of Hongkongers and threatens all that makes their home special. As ever, the question remains: how far will Beijing go?

Brendan Clift is a PhD Candidate and Teaching Fellow at the Melbourne Law School, the University of Melbourne.