Could Iran Win a Naval War Against America? 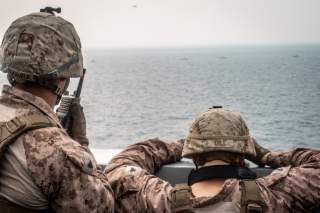 Key Point: The Persian Gulf could be the flashpoint between Iran and the United States.

Would Iran close the Strait of Hormuz, could it, and would the United States reply by force of arms if Tehran made the attempt?

Maybe, maybe, and yes. There is precedent: it assailed merchant and naval shipping during the “Tanker War” of the 1980s. Then, it was attacking the export earnings of its archfoe Iraq. The United States, the mullahs’ Great Satan, isn’t nearly so dependent as was Saddam Hussein’s Iraq on merchantmen plying the Persian Gulf. Washington nonetheless sees important interests at stake in this contested waterway—and that gives Tehran an opportunity to inflict pain should it choose.

America may not depend on Persian Gulf oil and natural gas, but its allies and trading partners do. It maintains close alliances in the region through the Gulf Cooperation Council, and would shirk these commitments at its peril. Nor could Washington allow a substantial fraction of U.S. maritime might, namely the Bahrain-based Fifth Fleet, to be stranded because Iranian forces had interposed themselves between Gulf waters and the broader Indian Ocean. Economic, diplomatic, and martial imperatives add up to a rationale that neither the Trump White House nor any other could ignore.

Short of quitting the Gulf region outright, the United States must fight to uphold its standing there.

Prediction is a fool’s errand in the mercurial world of international politics and warfare, but it is possible to glimpse certain broad contours of a naval war between the Islamic Republic and the United States. Iran can turn maritime geography to advantage, for one thing, waging irregular maritime warfare in and around the Strait of Hormuz. This is a setting with which Iranian mariners are intimately acquainted and where they bestride the home ground. Never discount the homefield advantage.

This narrow sea ranges from about 18 to about 51 nautical miles wide and is deep enough for submarines to remain underwater and elude detection while traversing it. At the northernmost point of the transit, though, the shipping lane narrows to only about 1.6 nautical miles—in large part because the water is too shallow at some places to permit deep-draft vessels to pass safely. Nor can traffic take a straight course through the Strait of Hormuz, as it does through the Bab el-Mandeb Strait to the Arabian Peninsula’s west. Ships take a northerly course, then make a sharp leftward turn toward the southwest off the northern tip of Oman before making a slight right turn to proceed westerly.

The Strait of Hormuz, then, demands that shipping hazard a fairly long transit while making a sharp maneuver at a predictable—and thus easily targeted—spot on the map. The Strait’s topography poses little trouble under routine peacetime circumstances, but wartime is another matter. Ships essaying the transit do so while constantly under the shadow of Iranian shore-based anti-ship weaponry such as cruise missiles and tactical aircraft, not to mention swarms of small surface combatants fielded by the Iranian Revolutionary Guard Corps. The Islamic Republic’s modest fleets of minelayers and Russian-built Kilo-class diesel submarines further compound the problem.

Such weaponry is challenging on the high seas. It is genuinely menacing in confined waters, where ships have little space to maneuver for defensive or offensive purposes. But that isn’t the last obstacle to maritime movement. Even after exiting the Strait, inbound vessels must pass within easy reach of Abu Musa and the Tunb Islands, which are claimed both by Iran and the United Arab Emirates but are under Iranian military control.

In short, this is a setting tailor-made for an inferior local power such as the Islamic Republic to mount an effective access- or area-denial strategy—making trouble for local antagonists and powerful outsiders if not prevailing outright. In light of the forbidding surroundings, then, a U.S.-Iran war wouldn’t be a naval war at all in the strict sense of the term. There would be no open-ocean rumble pitting roughly symmetrical battle fleets against each other. Nor does Iran need the wherewithal for such an engagement in order to accomplish its goals. It doesn’t take glamour platforms like aircraft carriers, cruisers, or destroyers to block a confined sea. Wily defenders can harness sea mines, subs, or fleet-of-foot surface craft to harass shipping or stop it altogether.

Guerrilla warfare, not the traditional sea fight, makes a better analogy for Iranian maritime strategy. Iranian defenders will concentrate asymmetric firepower and effort at the narrowest and most convoluted points in the Strait, where an enemy’s whereabouts are known in advance, targeting is easy, and escape is hard. They will harry oncoming vessels with mines, missiles, and torpedoes as they approach the critical juncture and after they pass by, if they do. But the most confined waters on the nautical chart represent the likeliest battlegrounds.

So, don’t make the mistake of comparing force structures and concluding that the U.S. Navy would steamroller the Iranian armed forces by dint of its total number of warships, aircraft, and armaments. A mere fraction of U.S. maritime forces will square off against the combined might of the Iranian military, including not just seagoing forces but shore-based fire support. How big a fraction of U.S. maritime forces would take part in a Persian Gulf brawl depends on myriad factors, including how much the U.S. political leadership prizes U.S. interests in the Gulf, what’s happening elsewhere around the Eurasian periphery, and how the leadership ranks the Gulf compared to commitments in hotspots such as the South China Sea or Mediterranean Sea.

Whatever fraction Washington can spare constitutes the measuring stick for Iranian prospects in battle. If Iranian forces can defeat that fraction, they are adequate unto Tehran’s purposes. If not, American prospects brighten. Success in this endeavor, in other words, is not foreordained for the U.S. armed services. Nor does repositioning an aircraft-carrier strike group to the Gulf’s vicinity, as the Trump administration did this week, furnish such a guarantee. In 2002, during the exercise “Millennium Challenge,” U.S. Marine lieutenant general Paul Van Riper, playing the red team, pummeled a U.S. Navy carrier task force by deploying the resources at Tehran’s disposal imaginatively.

What an American could do, the locals could presumably do better. Iran is a prospective foe worth taking seriously.

And lastly, it’s worth pointing out that the opportunity costs of losing in the Persian Gulf—or even of winning at high cost—could prove more painful than the direct costs manifest in battle losses. If you take the Pentagon leadership at its word, the Gulf region now constitutes a secondary theater of endeavor for the U.S. armed forces, taking a backseat to theaters where America and its allies are at odds with great powers like China and Russia. However compelling U.S. interests in the Middle East, that is, they must yield to more pressing interests at stake in great-power strategic competition.

How to apportion effort among multiple enterprises? Martial sage Carl von Clausewitz derives an invaluable formula for allocating resources and effort to meet competing demands. In the classroom I call it his Three Rs: reward, resources, and risk. Clausewitz cautions against an undertaking unless it promises “exceptional” rewards and unless commanders enjoy “decisive superiority,” meaning surplus capacity, in the primary theater. If the strategic circumstances meet that test, military magnates can siphon resources from the main theater without running undue risk to what the nation’s agenda-setters deem most crucial.

Or as Admiral Lord Jacky Fisher, the first sea lord of Great Britain’s Royal Navy, told First Lord of the Admiralty Winston Churchill in the years preceding World War I: “It is futile to be strong in the subsidiary theater of war and not overwhelmingly supreme in the decisive theater.” Risking what you value most for what you value less is folly. Fisher was arguing for a division of labor whereby the French Navy guarded the Mediterranean Sea while the Royal Navy saw to the Atlantic Ocean. Such an arrangement would permit each of the soon-to-be allies to husband its fleet in one expanse—and bolster Anglo-French marine supremacy in both.

The same Clausewitzian calculus must govern how Washington parcels out resources among primary and secondary theaters while taking account of risks and rewards. Whatever fraction of U.S. forces was lost or damaged in combat against Iran would be unavailable to help face down China or Russia—and America’s capacity to achieve its chief goals could suffer for the sake of a subsidiary commitment in the Middle East.

In other words, the White House must not launch into military adventures in the Persian Gulf without serious forethought. Sobriety—not bravado—must prevail within decision-making circles. The shades of Clausewitz and Fisher demand it.

This article first appeared in July 2019. It is being republished due to reader interest.