Could Israel Replicate Its Syrian Military Strategy in Gaza? 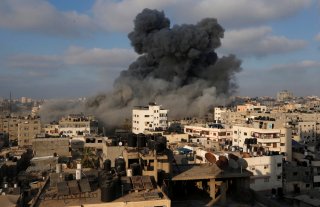 When the new Israeli prime minister, Naftali Bennett, addressed his new “change” cabinet this week, he said Israel is “at the outset of new days.” That’s immediately clear about the country’s politics, but for Israel to make progress in Gaza, after the latest fighting, will require some creative thinking and possibly new technological developments.

The Israel Defense Forces (IDF) appears to have performed extremely well in last month’s fighting with Hamas. The terrorist group did manage to fire 4,400 missiles into Israel over eleven days, killing ten Israeli civilians and one soldier, too often sending many Israelis into bomb shelters for too long, and managing to land some blows in the environs of Tel Aviv. Yet, the IDF prevented any other offensive operations into Israel. In the previous war with Hamas in 2014, Israel had been surprised by the number and extent of tunnels where terrorists hid and operated and stored weapons, and through which they sought to penetrate Israel. Yet, by last month’s campaign, Israel had solved the tunnel threat, partly through a barrier and sensors it installed underground, and Hamas didn’t manage to penetrate Israel through tunnels. Nor did it succeed to enter by sea or over land, nor successfully attack Israel by drone or mini-submarine. Not one non-rocket attack succeeded. While we don’t fully know yet the damage the IDF inflicted on Hamas, it seems the IDF killed many terrorists, and destroyed a good deal of its infrastructure, including its facilities and experts that manufacture weapons, even while severely restraining itself to limit civilian casualties.

While a significant military and moral achievement, time will tell whether the IDF has deterred Hamas for many years. As senior IDF officials remind, the Six-Day War was a spectacular success, but it soon after was followed by the War of Attrition and then the Yom Kippur War. And the Second Lebanon War of 2006 seemed riddled with failures, yet the Israeli-Lebanon border has been mostly quiet ever since.

A related question is what Israel can do going forward that could alter the depressing Israel-Hamas dynamic of the past dozen years.

Ever since Hamas brutally evicted the Palestinian Authority (PA) from Gaza in 2007, two years after Israel withdrew from the territory, the Israel-Hamas dynamic has remained broadly the same. Hamas, a Sunni Islamist terrorist entity whose charter is dedicated to killing Jews and destroying Israel, attacks Israeli civilian population centers with rockets and mortars and fighters, then Israel eventually responds with a military campaign that kills terrorists and destroys important terror infrastructure, which is embedded in schools, hospitals, and civilian neighborhoods. Israel’s goals in these operations have remained essentially the same: to protect its homeland, weaken Hamas and re-establish deterrence for a period of time until that breaks down and a rebuilt Hamas perceives opportunity in triggering a new conflict. And the cycle repeats.

The question that arises after each of the past four wars of the last dozen years is whether Israel should seek to eliminate the Iran-backed Hamas regime, and Palestinian Islamic Jihad, in Gaza. Israel has had four chances to do so, but has balked each time, even though it potentially could facilitate a less threatening, quieter southern border, deliver a blow to Iran, and remove a front that could pin down Israeli military assets amid a future major war with Iran.

The IDF is prepared for such an operation, and it might be forced at some point to execute it, but it has so far resisted it for at least three primary reasons.

First, and most obviously, it would require heavy use of IDF ground forces and a lengthy occupation, risking a great deal of casualties on both sides and strong international pressure and criticism. There was already an abundance of both during the latest hostilities that only lasted eleven days with casualties relatively low on both sides.

Second, there are no good options about who or what would govern Gaza afterwards. Egypt doesn’t want Gaza; its visionary president Anwar Sadat wisely sought every inch of Sinai and not one inch of Gaza in its peace agreement with Israel four decades ago.

The Palestinian Authority leadership no longer wants Gaza either, certainly not on the back of the IDF. Given its ignoring or rejecting often generous Israeli and American offers over the years, and its general mismanagement and corruption, the PA seems far more comfortable remaining a cause than developing into an effective governing body.

And it would be risky for Israel to facilitate PA control over Gaza. Yes, Israel has a decent security relationship with PA security forces, despite their sponsorship of terror against Israelis, but how realistic is it to entrust the PA with Gaza? The eighty-five-year-old PA president Mahmoud Abbas is in his sixteenth year of a four-year term, and just canceled elections, which helped trigger Hamas’ attacks on Israel to demonstrate its primacy. No one knows which PA faction would reign after Abbas leaves the scene or if the PA simply collapses and Hamas, or more likely the IDF, will be forced to take over.

There also is little interest by Israel or the United States to seek elections to help create a new Palestinian leadership. Israel certainly has little faith in Palestinian or Arab elections. Elections in Gaza in 2006 after Israel’s rather abrupt withdrawal failed miserably, leading eventually to Hamas taking control. And the so-called Arab Spring of 2011, which initially seemed to offer some promise for reform and democracy, led for a time to a Muslim Brotherhood government in Egypt, which was fundamentally hostile to Israel and the West. It also led to the phenomenally bloody civil war in Syria, ISIS, and the rise of Iranian influence in the region. None of this suggests to Israeli leaders that democracy and liberalism will soon flourish in a post-Hamas Gaza.

Nor is Israel eager to try regime change in Gaza. A similar attempt failed spectacularly in the First Lebanon War in 1982—the leader Israel installed was assassinated and Israel maintained its soldiers in southern Lebanon for eighteen years. Israel has been far more eager and successful in helping maintain Arab leaders in power, such as when it helped stymie Palestinian Liberation Organization and Syrian efforts to oust Jordan’s King Hussein in 1970.

Third, and perhaps most immediately persuasive, Israeli leaders do not want to get mired on their secondary southern front, when the main strategic challenge is in the north. Israel must keep the bulk of its forces ready to fight a major war with Iran, Hezbollah, and other Iran-backed forces in the region. The odds of such war have only grown with America retrenching from the region and about to rejoin the 2015 Iran nuclear agreement, which paves the way to a nuclear Iran—something Israel cannot and won’t allow, and which will strengthen the Tehran regime and fuel its regional aggression. This is no time for Israel to take its eye off the main Iranian threat.

Yet, Israel has learned that it cannot simply allow a neighboring enemy to amass a highly threatening arsenal. When the Second Lebanon War of 2006 ended, Hezbollah possessed about 10,000 rockets/missiles, but today it has roughly 130,000—many times more than what Hamas and Palestinian Islamic Jihad have in Gaza. A war with Hezbollah would dwarf in severity, for Israel and Lebanon, what Israel and Gaza just experienced, and other Iranian-backed forces in Syria, Iraq and Yemen and Gaza could join in in firing rockets/missiles. There are not remotely enough Israeli air defense batteries and interceptors to protect Israeli population centers and strategic facilities in such a war, necessitating immediate and massive Israeli attacks, including a robust ground incursion to minimize attacks across Israel.

Israel did relatively little in Lebanon while Hezbollah amassed its tremendous arsenal, one of the largest in the world. Israelis seemed to believe that, despite their many 2006 wartime mistakes, they had achieved a certain amount of deterrence with Hezbollah, and they worried that attacking Hezbollah and its growing arsenal could lead to a new war, while the country was war-weary following the 2006 conflict that was more challenging than expected. Israel remains a small country that cannot remain perpetually at war despite the many threats always facing it.

Israeli officials seemingly learned from this Lebanon debacle when approaching Syria following the civil war that erupted in 2011, when central authority imploded and foreign actors such as Iran, Russia, Turkey, ISIS, and various Iran-backed Arab forces intervened. Israel, through hundreds of air sorties and special forces operations, increasingly but selectively intervened militarily to prevent Iran from transferring to Hezbollah precision weapons and other ordnance threatening to Israel. This went a long way to preventing within Syria the development of Iranian/Hezbollah arms manufacturing and a large entrenchment of Iranian and Iranian-backed forces.

This proactive Syria model, what Israeli military planners call the “campaign between the wars,” because they intend such military operations to delay war, has emerged as Israel’s most successful method for dealing with its neighboring enemies.

Israel could try to adapt this Syrian model to Gaza, whereby the IDF regularly destroys Hamas’ terror infrastructure, such as weapons manufacturing facilities and arms depots, often in tunnels, and perhaps at times key Hamas commanders, as a way to weaken Hamas and its ability to rebuild militarily and attack Israeli civilians and population centers. These more routine limited strikes could strengthen Israeli deterrence and possibly delay a major Hamas-Israel war.