Could Japan Turn Its Helicopter Assault Ships Into Carriers for the F-35? 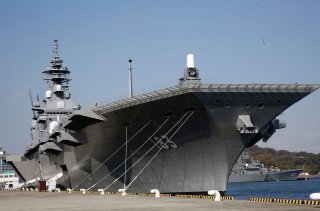 Key point: It will take a lot of modifications to transform Tokyo's two helicopter carriers.

The British company that built the Royal Navy’s two new Queen Elizabeth-class aircraft carriers wants to help Japan modify some of its own ships into carriers.

The Japanese government in November 2018 announced that it plans to enhance its two Izumo-class helicopter carriers in order to support F-35B Lightning II stealth fighters.

The announcement followed years of speculation that began even before Izumo commissioned into service in 2015.

BAE Systems wants to do the work, Natasha Pheiffer, the company’s managing director in Asia, told Flight Global. “She feels that BAE is well placed to assist Tokyo with the integration of fixed-wing fighters aboard the two ships owing to its work on the U.K.’s Queen Elizabeth-class aircraft carriers, which will also operate the F-35B,” Flight Global noted.

Tokyo plans to order another 100 F-35s to supplement the 42 stealth fighters it originally ordered in 2011. The first batch of Japanese F-35s are all A-models that require conventional runways. The new batch presumably would include some vertically-landing F-35B models for shipboard use.

Recoating the Izumos' decks is a straightforward procedure. Potentially more difficult is reorganizing the ships' internal spaces to accommodate the crew, parts, fuel and weapons an F-35 detachment requires. That’s the kind of work BAE Systems presumably would take on if Japan were to hire it for the Izumo conversions.

The modifications certainly are feasible, according to one Australian expert who studied the possibility of upgrading the Australian navy's Canberra-class assault ships in order to embark F-35s. A Canberra is 760 feet long and displaces 30,000 tons, making it roughly the same size as an Izumo.

Fortunately for Japan, its navy enjoys a strong alliance with the U.S. Navy. As Tokyo begins preparing the Izumos for F-35s, the Japanese fleet, in theory, could send pilots, staff and crew to train alongside their American counterparts who are already operating F-35s from ships.