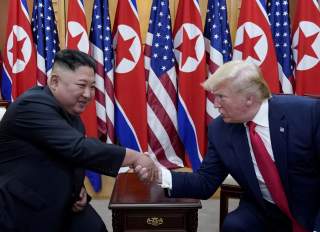 US President Donald Trump’s hope that the Korea question—particularly the part about North Korea’s nuclear capabilities—could be resolved by the sheer force of personality has been confirmed as a fantasy. The best that can be said of his meetings with North Korean leader Kim Jong-un in Singapore in June 2018, Hanoi in February 2019 and Panmunjom in June 2019 is that they broke a lot of ice—the last one, in particular, had an element of casual frivolity—making it harder for either leader to make frightening threats and be taken seriously.

But if the road back to browbeating and brinkmanship is a little longer than before, Pyongyang has signalled that Washington has left it with no choice but to make the journey: it has said that it is ending its informal, unilateral moratorium on testing nuclear devices and long-range ballistic missiles unless the US offers major concessions (especially on sanctions) to unblock the dialogue between them.

Where do we look for constructive things to do with this conundrum? Are there aspects of the situation that remain underexplored, stones that remain unturned? Improbable as it may seem, one candidate could be the offering of security assurances. In all previous endeavours to find a solution, Pyongyang spearheaded its negotiating position with the contention that it is the most threatened and insecure state on the planet and that—as a first step—the US (in particular) had to demonstrate convincingly that it had abandoned its ‘hostile policies’.

The essence of the Korean story—how it originated and evolved since World War II—has been utterly distorted. Ironically enough, among the six key parties—the two Koreas, the US, China, Russia and Japan—it’s the US, the perennial ‘fall guy’ on this issue, that has by far the most positive story to tell. Finding ways to get the real story out—about the origins of the 1950–1953 war, about the lost opportunities to shape North Korean assessments and aspirations, and about how this desperately poor and isolated nation ended up circa 2017 with a stockpile of nuclear warheads and an array of sophisticated ballistic missiles—should probably not, even at this late stage, be the first option. But it can’t hurt to make clear that it’s an option.

The offering of security assurances would provide an opportunity to refresh and develop an important piece of the puzzle. Such assurances would offer every state directly associated with security on the Korean peninsula to make a substantive contribution to the sort of positive atmosphere needed to find a way into the core issue: opening up the path that leads to a peninsula that is both reliably stable and not a focus of major-power competition. In such circumstances, you would expect Korean armed forces to be unmistakably defensive in size, character and deployment. As I have argued in earlier posts, the weak and unequal sharing of exposure and accountability among the six major players in addressing and resolving the many facets of the Korean issue has been a fatal flaw in past efforts to find a peaceful solution.

In a September 2005 joint statement from the since-abandoned Six-Party Talks, the US ‘affirmed that it has no nuclear weapons on the Korean peninsula and has no intention to attack or invade the DPRK with nuclear or conventional weapons’. Consideration could be given to getting the six states together again to see what each is prepared to offer in the way of security assurances to the other five, to provide an opportunity to negotiate reciprocal development of unilateral statements, and to explore the scope to combine these undertakings. Clearly enough, all six players would want to make their assurances conditional on the other five remaining fully compliant with the core principles of the UN Charter. Equally, however, any assurances need not be limited to hostile intentions or particular forms of military capability like nuclear weapons or other weapons of mass destruction, but could also address the size and disposition of military forces and possibly other tools of statecraft.

It’s also worth bearing in mind that the six states bring with them a formidable set of historical animosities that have very clearly complicated management of the Korean issue and continue to do so. The gradual drift of the US–China relationship toward contestation and rivalry has accelerated sharply since 2018. Japanese militarism in the 1930s and 1940s still casts a dark shadow over Tokyo’s relations with a number of countries but especially the two Koreas and China. Since 1961, China has had a formal alliance relationship with North Korea (comparable to that between the US and South Korea), but the net effect of living alongside imperial China for millennia is that neither Korea relishes the prospect of being left alone with their giant neighbour.

China and Russia were allies when they jointly endorsed North Korea’s invasion of the south in 1950 but fell out dramatically for some three decades (1959–60 to 1989), an enmity that contributed to irresponsible negligence on the part of both with respect to North Korea. Today, with China as the dominant partner, Beijing and Moscow are being meticulously careful to protect the positive relationship between them but, as in the past, rather secretive about their dealings with Pyongyang, leaving others to wonder whether they share similar aspirations for a durable settlement of the Korea question.

So, who among these six players might have the courage to pit their diplomatic skills against the challenge of brokering an agreement to conduct an official Northeast Asian dialogue on security assurances?

Ron Huisken is an adjunct associate professor at the Strategic and Defence Studies Centre at the Australian National University.