Could Russia Use Its Brand-New T-14 Tanks in an Invasion of Ukraine? 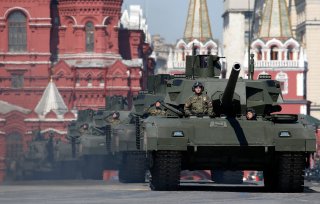 The force differential between Russia and Ukraine is massive, and Global Firepower reports that Russia operates as many as 12,000 tanks. As a result, a column of advancing Russian tanks will likely prevail in any large-scale ground invasion of Ukraine.

With over 150,000 Russian troops believed to be deployed near the Ukrainian border, any invading force would contain thousands of tanks. Russia’s tank force likely includes Cold War-era T-72 tanks, T-90 tanks, and a smaller number of newer T-14 Armata tanks. The T-14 Armata, which has received significant attention in the Russian press, is reported to be extremely advanced, although specific information on its capabilities is not readily available.

Would these T-14 Armata tanks be used in an invasion of Ukraine? While it is certainly possible, production plans for the T-14 appear to have fluctuated in recent years. TASS, a Russian state media outlet, has suggested that the Russian Army now operates twenty T-14s

Is the tank as incredible as Russian media reports claim? Although there are many unknowns, the T-14 is reported to be faster and more mobile than most existing tanks. The T-14 reportedly operates at speeds of up to fifty-five miles per hour and weighs only fifty-five tons. This would allow it to travel over bridges, urban areas, or other places where a heavier tank might be challenged to operate.

The biggest advantage of the T-14, however, may be its unmanned turret, which allows gunners to target threats without being exposed to enemy fire. Unmanned turrets have been under development in the United States for many years, so it is not clear how much of an advantage the T-14’s unmanned turret would be.

The most significant margin of difference may lie in the range, resolution, and precision-targeting capabilities provided by the T-14's thermal sights. This technology could allow a T-14 crew to destroy an enemy target without being identified by hostile forces.