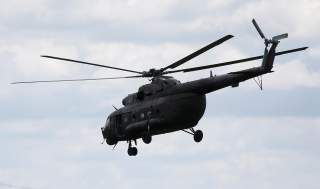 Within days after Mexico canceled a $1.4 billion order for U.S. helicopters, Moscow swooped in for the sale.

But Sputnik News, the Russian news site always lavish in praise of Russian weapons, helpfully offered some advice. “Are there more affordable alternatives with similar capabilities out there?” Sputnik asked, noting that the Mexican Navy already operates Mi-17 transport helicopters.

“Sikorsky and its parent company Lockheed Martin isn’t the only game in town as far as naval helicopters go,” Sputnik wrote last week. “Russia’s naval workhorse, the Ka-27, has comparable capabilities, and would likely to be much cheaper, if it were made available.”

“The Ka-27M, the latest modification of the tried and proven Ka-27 design, is equipped with an advanced integrated radar, acoustic and menetometric sensors and SIGINT suite, and a 360 degree monitoring system enabling the semi-automatic search and detection of surface, air and ground-based targets,” the news site said. “Armament can include light homing torpedoes, 50 and 250 kilogram [110 to 551 pound] anti-submarine bombs, heavy machine guns, and four external hardpoints for an assortment of other weapons. The customizable package would almost certainly be enough for fighting drug traffickers.”

Sputnik described the Seahawk’s price, which it claimed to be $170 million apiece, as “hefty.” But Sputnik was vaguer about the cost of a Ka-27. “Details on the price of the gunship Ka-27s are hard to come by, although a single Ka-27PV, the armed version of the Ka-27PS, has an estimated price tag of $14.5 million. The Russian defense ministry's 2014 and 2016 outlays to modernize existing anti-submarine warfare configuration Ka-27PLs came in at just over $10 million apiece.”

Sputnik also praised the Ka-27 as being cheap to operate, sturdy and reliable, and customizable for a variety of missions. The helicopters are used by Russia’s Border Guard Service, as well as the Algerian, Chinese, Indian, Syrian, Ukrainian, Vietnamese and Yemeni navies.

But Mexico, the southern neighbor of the United States?

Not a chance, says Inigo Guevara, a former director of Mexico’s National Security Council and now director at Jane’s Defense and Security in Washington, DC. First, Lopez Obrador and his transition team are new to the helicopter issue and lack the defense expertise to assess it.

Guevara also noted that no actual contract for the Seahawk has been signed. The Mexican Navy is looking for a helicopter, capable of anti-submarine and anti-surface warfare, to equip eight light frigates being built under license from a Dutch shipyard. The first will be launched late this year, but building them all will take six to eight years, which means the MH-60R order would be staggered over several years.

While the European NH90NFH naval helicopter is also under consideration, “the MH-60R is understood to be the favorite given that the Mexican Navy, Air Force and Federal Police have all selected, procured and operate the UH-60M Black Hawk,” says Guevara.

In addition, Sputnik’s claim that the MH-60R costs $170 million is exaggerated, according to Guevara. That number is based on a U.S. Defense Security Cooperation Agency estimate submitted to the U.S. Congress. It is “a theoretical price tag, not an actual sale, order, contract or anything similar. It’s a very high level figure that includes everything that Mexico could ever want on the MH-60R, plus similar price quotes for components and weapons.”

“The actual price for the MH-60R fleet is likely to be much lower,” Guevara adds.

Mexico does operate both Russian and American helicopters, as do other Latin American nations, Guevara points out. “However, it is highly unlikely that the Mexican Navy will consider a Russian naval helicopter for its embarked role.”

This article first appeared in July 2017. It is being republished due to reader interest.