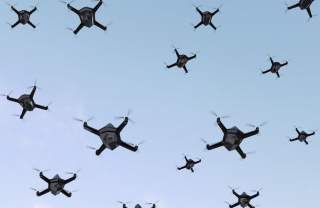 Key point: Drones can be used to counter drones and the military wants to have a lot of small, coordinated UAVs ready to fight.

22 Oct. 2019 -- They can paint or light up air, ground, or sea targets for enemy fighters, missiles or armored vehicles, massively increasing war zone vulnerability. The can instantly emerge from behind mountains to fire missiles at Army convoys, infantry on the move or even mechanized armored columns.

Overall, the Army is fast-tracking what could be called an entire sphere of defensive weapons to counter swarming drone weapons; these include Electronic Warfare innovations to jam enemy drone signals, Stryker-mounted Hellfire missiles to shoot drones out of the sky and -- in a Raytheon effort with the Army -- create an integrated “sense-track-hit” counter-drone kill chain.