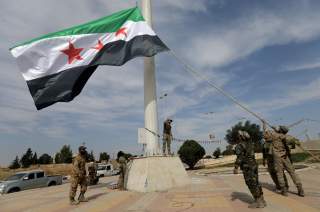 Key point: Israel has been working to stop Iranian military entrenchment in Syria.

Israel’s new Defense Minister Naftali Bennett has warned Iran that Syria will become its version of Vietnam, where its forces will sink in the sand under Israeli airstrikes.

“There’s nothing for you in Syria,” he said during a late November trip to northern Israel. “Whatever you try to do, you will encounter a strong and determined IDF that will strike you.” The Israel Air Forces have already been striking Iran frequently in Syria, with more than a thousand air strikes against hundreds of targets. Israel has also been more open about recent airstrikes, mentioning the Iranian Islamic Revolutionary Guard  Corps specifically and uncovering Iran’s role, from “killer drones” to precision missiles.

Bennett appears to want to add to what Israel is already doing. Named Defense Minister on November 13, he has previously been Minister of Education but has encouraged Israel’s Prime Minister Benjamin Netanyahu to take a tougher stance against Hamas in Gaza and Iranian threats. This is a bit ironic considering that Netanyahu has been one of the loudest voices globally against Iran’s role in the Middle East, opposing the Iran Deal and seeking an arrangement with both Moscow and Washington regarding Israel’s attempts to prevent Iranian entrenchment in Syria.

Bennett traveled to northern Israel with Netanyahu in late November where they met IDF deputy chief Eyal Zamir. Zamir traveled to the U.S. on an official visit on December 14 to discuss a range of strategic and operational issues, including countering Iran, according to the IDF. The current tempo of visits by U.S. military officers to Israel, and the trip to the north, appears part of a rising urgency of the Iranian threat. Bennett may want to add a new Israeli strategy to Jerusalem’s arsenal, “preemption,” or preemptive action to stop the enemy buildup, according to The Jerusalem Post. Not since the 1967 war has Israel considered such a major action.

Bennett and Israeli officials in general, have been increasingly talkative about Iran’s moves and the need to confront it. “An Israeli attack on Iran is an existing possibility that is under discussion,” Foreign Minister Yisrael Katz said, according to Corriere Della Sera in Italy. Israel will work tirelessly to confront Iran’s attempt at establishing permanent bases in Syria, and to break Iran’s “ring of fire” around Israel, according to Bennett.

The flood of reports about Bennett pushing for more strikes on Iran may be just election posturing for March 2019. But the comments appear to be more than that. “If we do not act today and take advantage of the window of opportunity, in the more distant future the risk will be greater,” he said on November 29. Israel could be deterred in the future because of a building of Iranian threats. That balance of factors has deterred Israel from striking Hezbollah and vice-versa since 2006 as Hezbollah build up an arsenal of more than 100,000 rockets. “More offensive military action alongside increased US economic sanctions and political pressure, these are the things that could get Iran out of Syria,” Bennett argues.

This stance takes into account US support for Israeli action that was lacking under the previous US administration. In the wake of President Donald trump’s decision to withdraw from  Syria, Secretary of State Mike Pompeo assured Israel that the US supports Israel’s actions against  Iran.

Israel has responded to Iranian rocket fire from Syria, and an Iranian drone entering Israeli airspace in February 2018, with widespread airstrikes in the past. But there is no evidence Syria is becoming Iran’s “Vietnam,” the way Bennett threatens it could become. So far, Iran and its Syrian regime ally have lost some buildings, munitions, and air defense, but few Iranians have been harmed. Missiles can be replaced. Iran’s attacks from Syria have not been sophisticated so far, including four Fajr-5 rockets fired in November, a failed attempt to fire rockets in September, and attacks in January 2019 and May 2018.

Israel now has a name given to its attempts to stop Iranian entrenchment. The ‘Campaign between the wars’ to counter Iran’s regional influence. The problem is that this looks more like Israel’s attempts to manage the conflict in Gaza and it’s not clear if it has reduced Iran’s presence in Syria. An article at the Institute for National Security Studies at Tel Aviv University notes that the objective is preventing escalation, deterring the enemy and “slowing down the force buildup [of Iran].” Bennett appears to be talking about the next stage. Israel is in the midst of its third election cycle in a year with a Prime Minister in power ten years who is under corruption indictments. In Israel, there is nostalgia for the film The Good the Bad and the Ugly and frequent reference to a scene where a character says “when you have to shoot, shoot, don’t talk.” Netanyahu has been critiqued for a decade about talking and not shooting. Bennett has been talking a lot, the question is whether it will underpin a new policy of more shooting.

Seth J. Frantzman is a Jerusalem-based journalist who holds a Ph.D. from the Hebrew University of Jerusalem. He is the executive director of the Middle East Center for Reporting and Analysis and a writing fellow at Middle East Forum. He is the author of After ISIS: America, Iran and the Struggle for the Middle East (forthcoming Gefen Publishing). Follow him on Twitter at @sfrantzman. This article first appeared last year.