Could Trump Replicate The Soleimani Killing Against North Korea? 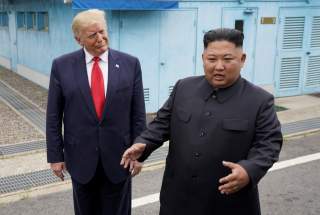 The missile strike happened in the dead of night, when millions of Iraqis were either sleeping or retiring for the evening. The plane carrying Quds Force commander Qassem Soleimani touched down at Baghdad International Airport just after midnight. Iran’s most notorious general climbed down the stairs and into a waiting car, where he was greeted by Abu Mahdi al-Muhandis, the deputy commander of Iraq’s Popular Mobilization Forces and a key Iranian ally in Iraqi affairs.

9 minutes later, an American MQ-9 Reaper tracking the two vehicles barreled down on both men, sent missiles towards the convoy, and engulfed it in a sea of flame. Both Soleimani and Muhandis were killed, an operation Trump has cited as a glorious accomplishment at campaign rallies ever since.

Soleimani’s assassination was not only a shocking development in terms of U.S. policy—George W. Bush and Barack Obama, Trump’s two predecessors, considered the option but ultimately rejected it as too risky.  It also led many Trump watchers inside and outside of Washington to reassess their previous beliefs about the president.  Gerard Araud, a former French Ambassador to the United States, told Bloomberg News that “The Americans are now totally unpredictable.”  Nathalie Tocci, a senior adviser to former European Union foreign policy chief Frederica Mogherini, labeled U.S. policy “more reckless” than it was during the U.S. invasion of Iraq nearly 17 years earlier.

All of which leads to an interesting hypothetical: if tensions between the United States and North Korea bubbled up to the surface circa 2017, would Trump consider the option to take out a member of the North’s senior military or political leadership? Would one of those targets be Kim Jong-un himself?

On a normal day—any day, really—this would be a stupid question. By law and policy, Washington doesn’t assassinate political officials unless that official works for a government engaging in hostilities against the United States (this is one of the arguments the White House has used in the days after Soleimani’s death, in addition to his designation as an international terrorist). The U.S. got out of the assassination game after the Church Committee uncovered a series of abuses, illegality, and botched policy planning within the intelligence community in the 1970’s, a product that resulted in President Gerald Ford issuing a ban on the tactic via executive order.

Beyond the law, targeting leaders of a nuclear-armed power is insane, the very kind of strangelovian scenario that would likely rush the cabinet to invoke Article 25 of the U.S. Constitution.  Never in the history of the United States has an American president believed such an option was a good idea.  The reasons are obvious: targeting an official representing a nuclear state would result in the type of extreme retaliation that could quickly spiral into an uncontrollable nuclear exchange. Mutually assured destruction kept the United States and the Soviet Union, two superpowers that at one point had tens of thousands of warheads between them, restrained from going down a cycle of escalation that would be difficult to escape from.

North Korea doesn’t have nearly as many nuclear weapons as the Soviet Union did, nor does it come close to other nuclear powers like France (300 warheads), the United Kingdom (215) or Pakistan (150).  Current estimates of the North’s nuclear inventory range somewhere between 30 and 60, minuscule compared to a U.S. stockpile of over 6,000.

A nuclear weapon, however, is a nuclear weapon. Even a single nuclear blast would do enormous damage, killing hundreds of thousands of people, causing political paralysis, economic fissures, and widespread panic amongst the public.  It’s not a road any responsible leader would choose to go down given the apocalyptic horror show at the end of the journey.

Nothing says “apocalypse” like a nuclear exchange on the Korean Peninsula, a highly-populated area in the heart of the most geopolitically important region of the world today. Seoul, a megacity with a population of about 10 million people, is a stone’s throw away from the thousands of North Korean artillery guns that would be Pyongyang’s first line of offense in the event of a decapitation strike on its chain-of-command.  That barrage, in turn, would lead to the inevitable U.S. and South Korean military reprisal, which depending on the extent of the attack could very well convince the leadership in Pyongyang that introducing a nuclear device into the equation is a necessary decision to prevent an all-out conventional invasion.

A president has to ask whether the assassination of a North Korean minister, general, or politburo member—or the killing of the supreme leader himself—overrides the death, destruction, and reputational harm accompanying such a dastardly decision.

Bottom line: President Trump, killing a top general of a non-nuclear weapons state is risky enough. It would be exponentially riskier if the target is an official of a country that possessed the world’s deadliest weapons.