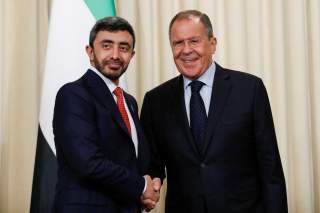 Key point: Moscow is looking for buyers for its Su-57. If Russia found a market, it could recoup some of the costs and build even more stealth fighters.

A Russian official has mentioned the United Arab Emirates as a potential buyer of Russia’s troubled Su-57 stealth fighter.

It’s unclear whether the Emirati government has expressed firm interest in the radar-evading jet. But there are clear reasons why the UAE at least would explore the possibility of an acquisition.

Sergei Chemezov, CEO of Russia's Rostec technology firm, which included fighter-maker Sukhoi, on Nov. 18, 2019 told reporters at the Dubai Air Show that India and the Emirates were interested in the Su-57.

"Su-57 -- India, most probably Emirates,” Chemezov said, according to Russian state media. “They have been considering and discussing it for a long time, though no decision has been delivered yet."

Chemezov said Rostec has offered to the Indians and Emiratis "localization.” In other words, the option of customizing the Su-57 for their own unique needs and potentially building some or all of the plane at their own factories.

Sukhoi has a long history of localization deals. India and China and several other countries operate and even manufacture their own versions of the Su-30 fighter.

To be clear, it’s possible -- even likely -- that nothing will come of the UAE’s supposed interest in the Su-57. It’s worth noting that India for years partnered with Russia to develop an Indian version of the Su-57. New Delhi in 2018 canceled the partnership, citing problems with the Su-57’s design and manufacture.

Chemezov’s mention of India in relation to the Su-57 probably amounts to salesmanship or mere wishful thinking. The Indian air force actively is seeking a new fighter, and the Su-57 isn’t on the short list of contenders.

Two dynamics could explain the talk of an Emirati Su-57. One, Russia is desperate for foreign investment in its stealth fighter program. The Su-57 first flew in prototype form back in 2010. Since then, Sukhoi has managed to build only around a dozen Su-57s. They’re expensive and lack key combat systems. A brief deployment to Syria by a pair of Su-57s apparently was pure propaganda.

As recently as mid-2019, Russia had no plan to acquire additional Su-57s. Russian president Vladimir Putin in May 2019 reversed the decision. The Russian air force would buy an additional 76 of the twin-engine planes, Putin vowed.

But Moscow is struggling to afford the planes, which easily could cost $100 million or more apiece. “Chemezov's comments make clear that Russia is still very eager to find foreign partners to help spread out the cost burden of the Su-57 program,” Joe Trevithick explained at The War Zone.

The Emiratis potentially are an easy mark for the Russians. The UAE for years has tried, and failed, to get approval from the U.S. State Department to purchase F-35 stealth fighters. For reasons that aren’t entirely clear but might have something to do with Israel’s own acquisition of F-35s, Washington has declined to clear the UAE to buy American stealth fighters.

Israel has a long history of predicating its own purchases of top-end U.S. weaponry on the condition that the United States not sell the same weapons to Israel’s Arab neighbors. It’s not for no reason that neither Egypt nor Saudi Arabia has F-35s.

The Emirates isn’t the only country that could buy Su-57s because it can’t buy F-35s. In July 2019, the U.S. government ejected Turkey from the F-35 consortium and canceled Ankara’s purchase of as many as 100 of the radar-evading jets. Turkey had insisted on also buying Russian-made S-400 air-defense systems, which could gather sensitive data on F-35s -- data that could wind up in Russian hands.

It’s no coincidence that Russia reportedly also has approached Turkey with an offer to sell Su-57s. The Russian stealth fighter could become the plan B for many countries that can’t get the F-35.

But that doesn’t mean the Su-57 is ready for Russia to sell.