Could The U.S. Economy Survive A Coronavirus Quarantine Until The Fall? 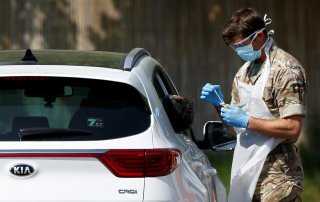 Should the American economy stay closed for business until a broad-based coronavirus test-and-trace system is operational? “Obviously” might seem to be the obvious answer. At least if your goal is to minimize the number of COVID-19 infections and fatalities caused by the virus.

Those taking a maximalist position on testing should consider what an extended summer shutdown would mean for the economy. By now, many are aware of those scary Wall Street economic forecasts for the second three months of the year. JPMorgan is looking for an (annualized) 40 percent contraction in Q2, while Goldman Sachs forecasts a 34 percent shrinkage. And don’t forget those mind-melting forecasts also assume big drops in Q1, -10 percent for JPM and -7 percent for GS (again all annualized numbers).

The good news here is that both banks see a big rebound in the second half: 23 percent in Q3 and 13 percent in Q4 for JPM and 19 percent and 12 percent for GS. Yet even with those big bounce-backs, we’re talking deeply negative numbers for the year as a whole — roughly 6 percent for GS, 7 percent for JPM.

Still, those outcomes would be a whole lot better than if Q3 were a repeat of Q2 and its economic quarantine, including further business disintegration and a sustained jobless rate of 20 percent or higher. And hopefully there will be enough testing — along with masks, telework, and in-public social distancing — to prevent a second summer wave of infections that results in an “oscillation between easing and tightening restrictions” that would result, according to GS, in a weaker rebound leading to a full-year number of -11 percent. (Note that the worst year of the Great Depression, 1932, saw a 13 percent GDP decline.)

We don’t want that. We really don’t. Nor does it seem likely that a long summer shutdown is realistically possible given the escalating economic impact, quarantine fatigue, changing risk preferences, and emerging signs of civil disobedience. We should also hope that American innovators will accomplish what government has so far failed to do.