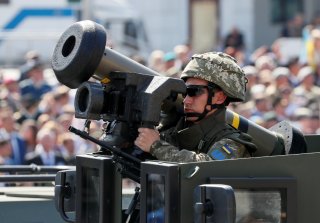 Russia has been amassing its military forces near the border with Ukraine, and there are fears that an invasion of the U.S. ally could be imminent. However, if Russian president Vladimir Putin expects a quick and decisive victory, he should think again. While Russia may have numerical superiority, especially in tanks—Ukraine has the American-made Javelin ATGM (anti-tank guided missiles).

The first shipment of the Javelin systems, which was worth about $47 million, was sent by the United States to Ukraine back in April 2018. Just this past September, the United States also agreed to a new $60 million military aid package that included the delivery of Javelin anti-armor missiles and other defensive and non-lethal systems. The total value of the U.S. military support to Ukraine is now in excess of $400 million for 2021, and the United States has committed more than $2.5 billion in security assistance with the non-NATO member since 2014.

That includes a $150 million military aid package from June, which included the delivery of counter-artillery radars, counter-drone systems, secure communications equipment, and electronic warfare capabilities. The delivery of those systems was meant to strengthen Ukraine's ability to counter Russian threats.

The man-portable "fire-and-forget" FGM-148 Javelin anti-tank missile system was developed in the 1980s to replace the M47 Dragon anti-tank missile system that was in service with the U.S. military. It utilizes an automatic infrared guidance that allows the user to seek cover immediately after launch, as opposed to wire-guided systems that required the user to guide the weapon throughout the engagement.

The Javelin has been successfully employed in Afghanistan, Iraq, and Syria—and it is considered to be effective against any tank in the world. An additional benefit of the system is its advanced tandem warhead, which offers target lock-on before launch and is able to penetrate armor equivalent to 600 to 800mm RHA (rolled homogeneous armor). The Javelin also utilizes a so-called "soft launch," which allows it to be fired safely from enclosures and covered fighting positions.

It is a reusable system centered on its Command Launch Unit (CLU), which houses the optical sights and controls. The missiles are carried in a container that also acts as a single-use launch tube, and are then launched at an upward angle since the Javelin is a top attack weapon system. However, the Javelin uses a more direct line of flight against bunkers.

The Javelin is also a self homing system, where the nose of the missile is equipped with an automatic infrared guidance system. That allows the operator to immediately seek cover after launch. While the FGM-148 Javelin is man-portable, a crew of two typically carries a single CLU and two missiles.

The platform could certainly be effective against Russian tanks that were to invade Ukraine, but it is also hoped that the mere fact that the Ukraine military has the weapons in its arsenal might be enough to ensure that Russia opts not to launch such an attack in the first place.