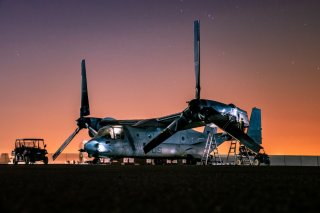 The Army’s Future Vertical Lift program is progressing quickly to introduce a new aircraft-helicopter platform. Consequently, some might be inclined to wonder how long the well-known Bell Boeing V-22 Osprey tiltrotor aircraft might be expected to fly.

The answer is likely a long time. The aircraft has increasingly been in demand in recent years and has continued to greatly expand its mission scope. Secondly, communications, software, computing, weapons systems, and cargo-carrying capacity have all been measurably enhanced in recent years in anticipation of many years of continued service.

In fact, it might not be a stretch to envision the Osprey as an aircraft able to fly well into the 2050s, 2060s, or even beyond. There is precedent for this kind of possibility with platforms such as the Boeing CH-47 Chinook helicopter and Boeing B-52 Stratofortress bomber. As is the case with the Osprey, the airframes of these platforms have remained viable, solid, and highly effective. With minor adjustments and reinforcements, the basic structure and configuration of both the Army Chinook cargo helicopter and Air Force B-52 have remained intact and unchanged. What has changed in a considerable way are the mission systems, computing apparatus, sensors, survivability technologies, and weapons. Therefore, a modern Chinook helicopter is, apart from its external appearance, virtually nothing like the 1960s era platform which first emerged. It could be quite possible, given the upgrades and sustainment activity that the Chinook could fly for 100 years.

Similar things could be said for the 1950s-era B-52, which may well fly into the 2050s. The class Vietnam-era bomber has received an entirely new suite of technologies including a new internal weapons bay, radio communications intelligence system, weapons payload capacity, and engine. The largest margin of difference, when it comes to aircraft performance, will likely fall in the realm of electronics, sensing, AI-enabled computing, and weapons. These are all things that can be accomplished or enhanced through software upgrades and computing adjustments, improvements that do not require major hardware changes.

The Navy’s future vision for the Osprey is also evidenced by its new “Navy variant” CVM-22B aircraft intended to take over the Carrier Onboard Delivery mission.  The Navy variant, which will launch from the deck of carriers to transport critical personnel from ship-to-shore, will replace the Grumman C-2 Greyhound aircraft which has flown for many years. As a vertical take-off and landing platform, an Osprey-enabled Carrier Onboard Delivery (COD) mission can take place in a wider range of mission scenarios. The Navy variant is engineered with extended fuel tanks to increase range, enabling an aircraft to travel 1,150 miles from shore to ship as well as a new beyond-the-horizon radio system.