Could You Pass the Army's New Tough Fitness Test? 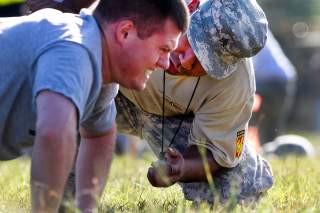 Key point: The military needs to ensure its men and women are fit. Here is what it would take to successfully pass the new Combat Fitness Test.

By October 2020, all soldiers will be required to take and pass the Army’s new gender- and age-neutral Combat Fitness Test, which has more events and less time for rest than the service’s current PT test, officials said on Monday.The Army has not yet decided what the standards will be that soldiers have to meet on each of the test’s six events, or whether soldiers will take alternative tests if they fail any or all of the events, said Sergeant Major of the Army Daniel Dailey.