Could You Sink An Aircraft Carrier Without Using a Missile? 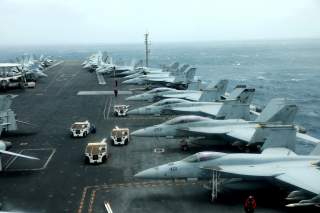 The Pentagon just released its annual report on China’s military power, which once again highlighted Beijing’s efforts to put American aircraft carriers at risk. Right on cue, China announced a major milestone for a system that might be a key component of its antiaccess/area-denial (A2/AD) strategy.

How long? Basically, indefinitely. According to China Daily, “future improvements will enable it to remain aloft several months or even several years.”

Jeffrey Lin and P.W. Singer, who write the excellent Eastern Arsenal blog, note that the CH-T4 is an impressive combination of big and light. The drone’s wingspan is around 130 feet, which is wider than a Boeing 737. At the same time, the CH-T4 only weighs between 880 and 1,100 pounds. By way of comparison, Boeing 737’s lowest typical operating empty weight is over seventy thousand pounds, and its maximum gross takeoff weight can reach as high as 170,000 pounds. Besides being slender, the CH-T4’s lightness is due to its carbon fiber and plastic components.

The drone can also travel at speeds of 125 miles per hour. However, it will also be able to cruise at sixty-five thousand feet, so it will be able to cover a huge swath of land without moving very far. Indeed, Lin and Singer point out: “It can utilize its high flight ceiling to maintain line-of-sight contact with over 400,000 square miles of ground and water. That's about the size of Egypt. For both militaries and tech firms, covering so much territory makes it an excellent data relay and communications node.”

What Lin and Singer don’t mention is that these capabilities will make the CH-T4 an excellent asset in China’s quest to hold America’s aircraft carriers at risk in the Western Pacific. Much of the attention given to that effort focuses on China’s so-called “carrier-killer” missile, the DF-21D. But as I noted last week in relation to North Korea, the missile itself is only one piece of the puzzle. Even more important is the sophisticated “kill chain” of surveillance, radar and communications systems needed to track and provide updated targeting information to the antiship ballistic missile while it is in flight.

The logic of this approach, they argued, is that it “exploits the fact that, to attack our forces, an adversary must complete a sequence of actions, commonly referred to as a ‘kill chain.’ For example, surveillance systems locate U.S. forces, communications networks relay targeting information to weapons launchers, weapons are launched, and then they must hone in on U.S. forces. Each of these steps is vulnerable to interdiction or disruption, and because each step must work, our forces can focus on the weakest links in the chain, not each and every one.”

Once it is operational, the CH-T4 will complicate these efforts by increasing the redundancies in China’s kill chain. For instance, if America is able to disrupt or destroy Chinese satellites, Beijing can rely on the drone to provide the information necessary to track American ships. The CH-T4 will have other comparable advantages over other surveillance systems. On the one hand, they will be cheaper and more flexible than satellites, while at the same time flying higher and farther away from the battlefield than different surveillance aircraft and ships. This combination will make it more difficult for Washington to destroy the surveillance step of the kill chain, although it could still focus on other steps such as disrupting the communication networks.

None of this is news to the U.S. military. Although the Pentagon’s newest report on China’s military didn’t mention the CH-T4 by name, it did note that “the acquisition and development of longer-range unmanned aerial vehicles (UAVs) will increase China’s ability to conduct long-range ISR and strike operations.”

Fortunately, the U.S. military will have some time to figure out its response, as China Daily reports that it will “take several years for designers and engineers to improve and test the aircraft before it is delivered to users.” If the United States’ own record at developing this type of technology is any guide, Beijing should expect a few more hiccups along the way. NASA's Environmental Research Aircraft and Sensor Technology (ERAST) began working on the Helios Prototype well over a decade ago. In 2001, it completed an important milestone by flying at an altitude of ninety-six thousand feet (29,260 meters). Yet a Helios crashed during a flight test just two years later. Europe, meanwhile, is also trying to develop so-called pseudo satellites.

Zachary Keck is the former managing editor of The National Interest. You can find him on Twitter: @ZacharyKeck. This piece was originally featured in June 2017 and is being republished due to reader's interest.