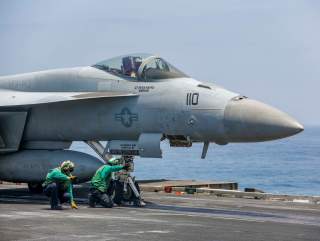 It’s either a badge of honor or a countdown to war.

Iran finds itself in august company. The Army already has decks of cards for Russian and Chinese weapons. And then there was the famous “most wanted” deck of Al Qaeda leaders distributed to American soldiers in Iraq.

The idea is to make it easy for soldier to remember and recognize what various enemy weapons look like. Much like using video games and comic books for military training, the theory is that a deck of cards makes learning a little more fun.

Not surprisingly, anti-aircraft weapons account for several cards. Among them are surface-to-air missiles, including the Russian-made SA-5, SA-13 and SA-22, and the American-made Improved Hawk sold to Iran before the Iranian Revolution.  There are also man-portable anti-aircraft missiles such as the SA-7 and SA-24, and the Swiss-made Oerlikon GDF 35-millimeter self-propelled anti-aircraft gun. In a U.S.-Iran war, American fixed-wing aircraft and attack helicopters would be a key – actually the decisive -- factor. Knocking out Iran’s anti-aircraft defenses would be a priority.

Iran has almost 7,000 artillery pieces, ranging from self-propelled howitzers and multiple rocket launchers to medium mortars. They could potentially rain devastating fire on American ground troops. Weapons that made it to the card deck include the Russian D-20 152-millimeter howitzer, the American M114A1 towed 155-millimeter howitzer and Iran’s homegrown Fadijr-5 multiple rocket launcher.

Iran has a considerable armored fleet of armored vehicles, including about 1,600 tanks and about 1,200 tank-like infantry fighting vehicles and armored personnel carriers. The deck has cards for the T-72 tank, the Iranian-modified T-72S Karrar, the Iranian-designed Zulfiqar and the British-made Chieftain. Curiously, there is no card for Iran’s 150 American M-60A1 tanks, though perhaps that’s because the M60 is no longer used by U.S. troops.

What is particularly interesting is the cards for a weapon that is usually associated with America, rather than America’s enemies. The U.S. Army’s deck features cards for six – that’s right, six – different Iranian drones: the Mohajer 2, 4 and 6, the Shahed 129 (which resembles a U.S. MQ-1 Predator or Israeli Hermes 450), and an Ababil 2 loitering munition (“kamikaze drone”), an explosive-laden UAV which crashes into its target. Iran and its proxy Hezbollah have flown drones in Syria and over northern Israel. If war erupts, U.S. Army troops would likely face numerous Iranian drones, so recognizing them would be important.

If there is one thing that the Iran cards show, it’s how hard it is to recognize weapons belonging to a nation with a polyglot arsenal. At least with Russia and China, their card decks can focus only on weapons made by those nations. Iran, and other nations across Asia, Africa and the Middle East, operates a mixture of old and new Russian, American and European weapons. Fortunately for a U.S. rifleman trying to figure out what that tank-looking object in the distance is, Iran doesn’t use modern American weapons, so at least there’s less chance of misidentification.