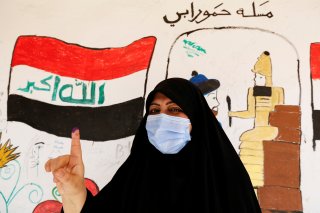 Iranian-backed groups in Iraq have a history of using violence as a political tool to get what they want, particularly when they feel vulnerable. As Iraq's parliamentary election results have exposed the lack of popular support for the Iranian-backed bloc, there will likely be a surge of violence in Iraq, some of which will target U.S. assets on the ground. In addition to responding with strength to any attacks carried out by Iranian-backed groups in Iraq, the Biden administration should take advantage of the election’s outcome and show support for the United States’ Kurdish allies. Ultimately, it is in America’s best interest to strengthen our ties with Iraq, and the parliamentary election results are an opportunity to do so.

In early December, the Iraqi Independent High Electoral Commission (IHEC) certified the results of the country’s October parliamentary elections. Despite immense pressure from Iranian militias to overturn the results in their favor, the IHEC confirmed Shia cleric Muqtada al-Sadr’s victory. As Sadr’s movement gained nearly 20 percent of the available seats, the Fatah Alliance, home to the Iranian-supported Popular Mobilization Units (PMU), lost more than half of their previously held seats.

Even before the IHEC released their results, the PMU denounced the election as a “scam” and made every effort to overturn the outcome. The militias staged a violent protest outside of Baghdad’s fortified Green Zone, injuring hundreds of security forces, and carried out an alleged assassination attempt of Prime Minister Mustafa al-Kadhimi days later. This week, a committee formed by Prime Minister Mustafa al-Kadhimi found Iranian militias guilty of firing the first bullets during a violent demonstration outside of the Green Zone that began right after the preliminary election results were released. The PMU and its supporters were found guilty of injuring twenty-one security forces with bullets and another 284 with rocks and various objects.

The PMU has a history of using violence and threats to gain political leverage over the prime minister. Prior to the fourth round of U.S.-Iraq strategic dialogues last spring, Iranian militias took over central Baghdad and set up an impromptu parade, seeking to influence U.S.-Iraqi relations and pressure Kadhimi to expel all American military personnel from the country. The fighters rode around Baghdad with loaded guns and chanted threats to cut off the prime minister’s ear. Additionally, the PMU carried out dozens of rocket and drone attacks targeting U.S. military and diplomatic assets in Baghdad to emphasize their stance on the talks. Today, the militias aren’t acting any different.

The Fatah Alliance’s sweeping defeat in Iraq’s parliamentary elections isn’t the only positive outcome to come from this race. The Kurds, who are U.S. allies, won a substantial number of seats in the race. The Kurdistan Democratic Party (KDP) gained thirty-one seats and the Patriotic Union of Kurdistan (PUK) claimed eighteen. The Biden administration should capitalize on the PMU’s loss and the Kurds’ gains by supporting our allies’ victory. A strong U.S.-Iraq relationship is in the best interests of U.S. national security for multiple reasons. Encouraging Iraq’s sovereignty will counter Tehran’s proxy network in the region, ultimately fracturing militias and preventing them from targeting U.S. assets on the ground. Additionally, ISIS has gained momentum in recent months and claimed responsibility for various attacks throughout the country. Last week, several civilians and Peshmerga fighters were killed by ISIS in northern Iraq, indicating that the terror group is gaining strength. Maintaining the presence of U.S. counterterrorism officials and their support for Iraqi Security Forces is necessary to effectively confront ISIS.

There is a silver lining in the violence and demonstrations that the PMU will likely engage in as they attempt to overturn the elections. According to the official election results, the PMU is rapidly losing popular support. Already frustrated Iraqis could view the PMU’s actions as proof that they don’t care about the best interests of the country. Finally, if the U.S.-Iraqi relationship is strengthened, Tehran’s attacks on the Green Zone could be further deterred.