Counterfeit M4 Carbines Being Manufactured in Pakistan and Afghanistan 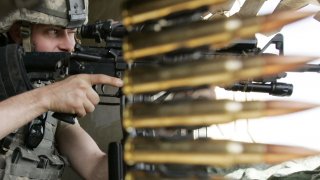 Jammu and Kashmir Police Chief Dilbagh Singh has found an M4 Carbine among a number of illegal weapons that were seized following a recent raid, according to recent reports. A cursory inspection of the firearm might have led some to believe the gun was stolen from the United States military at some point. However, upon closer look at some of the stamps on the weapon didn't seem quite right, and the serial number didn't match any missing American weapons.

That is because it wasn’t an actual American-made M4. It was believed to have been illegally manufactured in Pakistan or Afghanistan, The India Times reported. Such weapons aren’t actually that uncommon. They are just a twist in copies that have been produced in the region for centuries.

Ever since the first firearms passed through the Khyber Pass region between Afghanistan and Pakistan there has been a “cottage industry” that has mass-produced highly accurate and functional copies of firearms. Two centuries ago that included what can only be described as “counterfeit” versions of the English Land Pattern musket—also known as the Brown Bess.

Crafty artisans and self-taught gunsmiths were able to take whatever metal they could get hold of, and with rudimentary tools created functional firearms that were close in design to the actual weapons used by the military powers. All that these makers of knock-offs required was a sole version to serve as a template from which the gunsmiths reversed everything from the shape of the individual parts to the action. In most cases, the work was done on dirt floors with the most basic knowledge of firearms technology.

Over time the tools improved, as did the quality of the weapons. In fact, today it is possible to find nineteenth-century firearms with stamps that seem near-identical to those found on actual British military weapons.

What is most impressive is that this trade didn’t fade away. The primitive tools have given way to milling machines, CNC machines and other tools that aren't that different from what some independent gun makers in the United States use.

The town of Darra Adam Khel in the Khyber Pakhtunkhwa province of Pakistan has even gained international fame and notoriety for its bazaars that are filled with gunsmiths and weapons merchants. The side-alleys and narrow streets are lined with small gun shops many of which have operated since 1897. According to recent reports almost three-quarters of the people in the town are involved in the gun trade and upwards of seven hundred guns are produced daily.

During the Soviet’s War in Afghanistan, it wasn’t Martini Henry or Lee Enfield rifles that were copied but rather AK-47s, AKMs and SKS rifles. Now throughout Khyber Pass region near the Afghan and Pakistan frontier, it is the M4 Carbines used by the United States military and other powers that are routinely being copied.

What is especially worrisome now is that these weapons aren’t just being used locally by tribal chiefs or even the Taliban—neither of which should even be considered a good situation—but the fact that the weapons are increasingly being smuggled out of the region and sold on the black market. This has included those M4s that are now being seen with disturbing regularity in India.

However, the weapons could be as dangerous to the shooter as to any intended target. As the Silah Report noted, while many could be fooled into thinking the knock-offs were the real deal, the upper and lower receivers aren’t forged to the proper specifications and may not have the same tensile body strength as the originals. Caveat emptor—but that has always been the case with any gun from the Khyber Pass region.