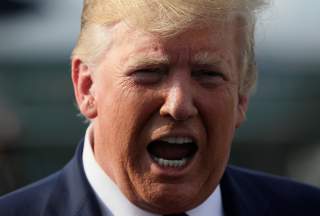 It has only been two weeks since President Donald Trump formally addressed the nation in the wake of deadly shootings in El Paso, Texas; Dayton, Ohio; and Gilroy, California. But on Sunday, not long after he initially showed support for enhanced background checks, the president suddenly reversed course, suggesting any momentum for passing any meaningful legislation to curb gun violence may have already dissipated.

Speaking to the press before returning to Washington from vacation at his golf resort in Bedminster, New Jersey, Trump suggested Congress had been considering various proposals in the aftermath of those shootings, but said he is primarily concerned about “mental health” issues, and insisted that the country needs to bring back “mental institutions.”

He added that, “unrelated,” he also supported voter identification laws, which have proven to serve no purpose but to suppress minority votes.

Later during the gaggle, a reporter pressed Trump on his specific position on background checks. He deferred to Congress and defended his support for the Second Amendment.

“People don’t realize we have very strong background checks right now,” he said. “If you go in and buy a gun, you have to sign up. There are a lot of background checks that have been approved over the years. So I’ll have to see what it is.”

He then referred once more to a “big mental problem.”

Asked again about his own position on background checks, Trump replied, “I’m not saying anything.”

This is just the latest step the president has taken to downplay expectations on gun violence prevention measures following the latest round of mass shootings.

During a formal address to the nation on August 5, Trump seemed to suggest that the only realistic solution to repeated gun violence was the implementation of “red flag laws,” which allow law enforcement officials to temporarily take guns from people expressing threatening language. The president at the time was reportedly considering using executive action to circumvent Congress on guns — a flip-flop from his past opposition to such a move — though what might be included in that executive action remained a mystery.

The National Rifle Association strongly opposes any additional gun control measures, and in the past has pressured Trump to bow to its views. NRA chief executive Wayne LaPierre reportedly held several phone calls with the president days after the shootings in El Paso and Dayton, according to officials who spoke with The Washington Post, and not long after, Trump tweeted his support for the NRA, assuring them that “their very strong views” would be “fully represented and respected.”

The president also deflated hopes of reviving an assault weapons ban, falsely claiming that “there is no political appetite for that at this moment,” even though a majority of the country supports bringing back such a ban.

Speaker Nancy Pelosi (D-CA) called on the Senate this month to return early from its August recess to take up some of the gun reform measures previously passed by the House of Representatives. Senate Majority Leader Mitch McConnell (R-KY) refused, saying the Senate would take up the issue when it reconvened in September.

Pelosi nevertheless doubled down Friday on her calls for the Senate to return earlier than planned. The House Judiciary Committee has likewise announced it would do just that, reconvening on September 4 to consider a set of bills, including a ban on high-capacity magazines. The committee will also hold a hearing on September 25 to discuss military-style assault weapons.

This article has been updated to state that Trump spoke with the NRA following the El Paso and Dayton shootings, according to a report by The Washington Post.

This article originally appeared at ThinkProgress in 2019.