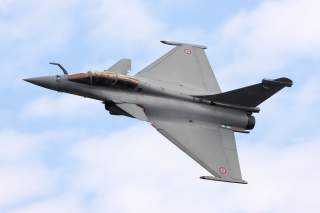 In what can accurately be described as a total nightmare, a 64-year-old civilian passenger was accidentally ejected from a French Air Force Dassault Rafale B fighter jet during takeoff from Saint-Dizier Airfield, a French military spokesman said.

The unidentified civilian, who the French military said "does not belong to the [French] Ministry of Armed Forces" and The Aviatonist speculates was likely aboard for an orientation flight, reportedly suffered serious injuries during March 20th incident.

The incident spurred the French Air Force to suspend training missions involving its Rafale fleet as a precautionary measure, French aviation site Aviation Journal reported at the time. The suspension was lifted on March 28th.

Three separate investigations involving French military and civilian aviation authorities are currently underway to determine the cause of the ejection, The Aviationist reports.

While it's unclear exactly how fast the aircraft involved was traveling, but the Rafale was designed for both land and carrier operations, meaning it's capable of taking off from a short (less than 400 meter) runways with some additional thrust.

Here's hoping the afterburners weren't on.