Cut off the Cash: How to Crush Mexico's Drug Cartels Once and For All 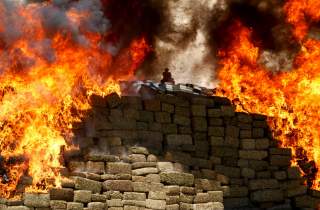 2019 closed out another violent year in Mexico with a record 34,582 murders, largely driven by organized crime. High-profile killings, including an October massacre by drug cartels targeting women and children, have brought renewed attention to the deteriorating security situation in Mexico under President Andrés Manuel López Obrador (AMLO). Events such as the failed capture of the son of notorious kingpin El Chapo Guzmán also highlight the continued capacity of cartels to overwhelm Mexico’s security forces. To reduce the overwhelming capacity of organized crime, the U.S. and Mexico should boost cooperation against organized crime with a particular emphasis on debilitating illicit financial structures to choke off vital funds to criminal organizations.

According to the State Department, billions of dollars are laundered through the Mexican financial system each year, primarily linked to drug trafficking and organized crime. This money is used to purchase high-powered weapons, pay hitmen, bribe government officials, and finance other activities that empower criminal organizations to keep security forces at bay.

Despite this dramatic threat, AMLO’s strategy against organized crime in Mexico has been underdeveloped and even neglectful. President López Obrador has dismissed concerns about rising violence with dubious claims of progress, instead focusing on his political war with the Mexican elite. The Mexican government hailed the creation of the National Guard last year as a key tool against organized crime. However, 6 months after its launch, the impact of the new force on violence levels has been negligible. Candid comments from U.S. officials highlight concerns over the lack of a comprehensive security strategy from the AMLO government.

The underlying failure of institutions and rule of law in Mexico has bolstered the challenge posed by organized crime. Impunity remains a dramatic challenge–Mexico leads Latin America with the worst performance according to the Global Index of Impunity, an international ranking by academics at the University of the Americas Puebla. Corruption and insufficient resources plague security forces and prosecutors tasked with leading the fight against cartels.

Progress against money laundering also lags in Mexico’s efforts against organized crime. Corruption, institutional weakness, and regulatory deficiencies leave most money laundering cases without successful prosecution. While Mexico is a primary hub for illicit finance in the Western Hemisphere, the government secured only 22 convictions for money laundering in 2017, the most recent year for which the data is available. Regulatory and legal loopholes, including limits on beneficial ownership and oversight requirements, enable the widespread use of shell corporations and laundering of money through real estate and front businesses. According to the Financial Action Task Force, money-laundering investigations are reactive instead of proactive, while insufficient resources leave Mexican investigators overwhelmed by the wave of illicit financial flows.

That being said, AMLO’s government has made some notable progress on financial crimes. In 2019, Mexico’s Financial Intelligence Unit was on track to quadruple the number of frozen financial accounts seen in 2018. Some of these investigations have uncovered important money laundering operations related to transnational organized crime. However, many of these cases deal with political and business corruption rather than cartel activity, reflecting AMLO’s political battle with Mexican elites. Combatting political corruption is an essential, but insufficient, measure in the struggle against organized crime.

Unless the U.S. and Mexico can debilitate the illicit financial networks of cartels, they will continue to overwhelm security forces with devastating results. AMLO’s willingness to crack down on money laundering in Mexico presents an invaluable opportunity in the fight against organized crime, however US support and leadership are essential to honing Mexico’s efforts. The U.S. should seize on the moment to establish a robust partnership that combines political will and resources to dismantle the illicit financial networks housed in both Mexico and the United States.

This includes boosting international technical assistance and addressing domestic US regulatory vulnerabilities on shell companies. US investigations and sanctions are also crucial to keeping Mexican enforcement efforts on track. For example, in May, after the United States sanctioned a Mexican judge and former governor for accepting bribes from drug cartels, the Mexican government sharpened its focus on uncovering corrupt judges linked to organized crime. The recent U.S. arrest of Mexico’s former secretary for public security also led to subsequent action by Mexico’s Financial Intelligence Unit. The U.S. can further incentivize AMLO’s investment in a campaign against cartel finances by leveraging its support as well as Mexico’s desire for access to frozen illicit funds in U.S. jurisdictions. Such a renewed, bilateral effort is crucial to turning the tide of drug flows and rising violence in Mexico.