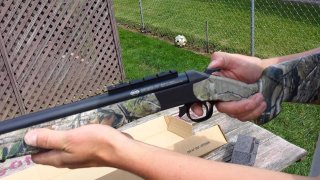 There are plenty of options for a young shooter out there today, but the CVA Scout .410 shotgun is one that is ideal for the novice but still will be a trusty firearm as skills improve. Introduced at this year's SHOT Show (Shooting, Hunting, Outdoor Trade Show), the Scout is a high-quality single-shot .410 shotgun that is sleek, lightweight, easy to operate and rugged.

Scout has been CVA’s line of affordable single-shot hunting rifles and the addition of the shotgun expands the brand offering a quality firearm at an affordable price. Now this company likely doesn’t spring to mind immediately compared to more established brands such as Mossberg and Remington, but Georgia-based Connecticut Valley Arms (CVA) has made a name for itself by providing guns and accessories at the best values available.

The company, which was only founded in 1971, produces barrels at the Bergara Barrels factory in the region of Spain that has been famous for gun-making for hundreds of years.

The Scout .410 is no bargain-basement shotgun, and with an MSRP of just $397.95 it is easy to see why it has already become a top seller for this year. It offers quality at a reasonable price.

The shotgun's composite material stock is 100 percent ambidextrous and features CVA’s CrushZone Recoil pad to deal with the recoil kick from the .410; and it is outfitted with a full turkey choke and is decked out in Realtree Timber camouflage pattern to help conceal it from wary toms. The break-action is also fitted with a DuraSight rail that is compatible with both Pictinny and Weaver-style bases so it can be used with a shooter’s optics.

The shotgun is also built on the same chassis as the Scout centerfire rifles, while the stock provides shooters with about an inch of adjustment—from 13- to 14-inches—allowing it to be dialed in for those hunters who are of a smaller stature while still feeling good to taller or larger hunters. It weighs just 7.5 pounds so while it isn’t the lightest single-shot shotgun on the market it won’t break the back or the bank!

About the only catch with this one is that ten states out there don’t take kindly to the .410 shotguns, so this one is excluded from sale in Connecticut, Delaware, Illinois, Indiana, Iowa, Maine, Nevada, New Hampshire, New Jersey and Rhode Island. Let’s just say that's their loss.

14-inch length of pull in standard