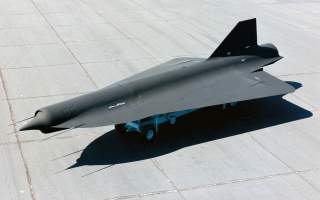 In late 1964, China detonated its first nuclear weapon and joined the front ranks of world powers. But the CIA had few ways of peering into the Middle Kingdom. Human intelligence was very limited and the shoot-down of a U-2 over the USSR in 1960 demonstrated the need for better spy planes.

Lockheed’s Skunk Works was hard at work developing the U-2?s successor, the legendary SR-71, and its chief, Kelly Johnson, had given much thought to the problem.

His solution? The first near-hypersonic drone.

The D-21 was a Mach-3 drone that shared a lot of technology and design with the SR-71. It was designed to be launched from a carrier aircraft at high speed, sprint over foreign territory with a camera, return to international airspace and eject its film pod for aerial recovery.

This was, and is, a daunting challenge for any aircraft and really pushed the envelope for the 1960s. The ramjet engine and titanium skin worked great, but the innards weren’t up to speed. One Lockheed assessment of the avionics said that they used “outdated 1940s-era electro-mechanical relays, technology and hardware that were not compatible with speeds in excess of Mach 3.3 at or above 90,000 feet,” according to historians James and Nora Goodall.

The first configuration looked like something out of Star Wars — a shark-sleek two-seat SR-71 with its “mini-me” drone mounted on its back. The piggyback set-up ultimately doomed the zoom; the fourth airborne release test went terribly wrong and the drone crashed into the SR-71, resulting in the death of the launch-control officer.

Sohe D-21s were moved to the B-52H and hung from the bomber’s giant Hound Dog cruise missile pylons. A hefty solid-rocket motor replaced the SR-71 in getting the ‘bot up to operating speed.

Subsequent tests were spotty, with a number of equipment failures and bad luck. When the drone didn’t crash or get lost, its film pod sometimes either failed to eject or sank. Nevertheless, the program soldiered on, and ultimately four operational flights succeeded in photographing China’s Lop Nor nuclear test site between 1969 and 1971.

The last D-21 crashed in China and its wreckage eventually wound up in Russian hands.

The D-21?s mixed success and high operating costs made it an easy target for retirement once U.S. president Richard Nixon and his secretary of state Henry Kissinger began overtures to the Chinese leadership. The surviving D-21s were put out to pasture at Davis-Monthan Air Force Base in Arizona, where curious onlookers noted the Darth drone.

Eventually the Air Force opened up and doled out the incredible machines to a number of aviation museums around the country.