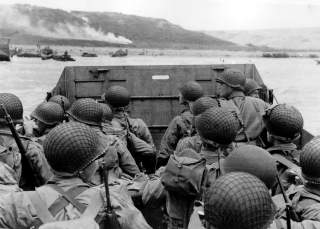 History and many movies have lionized the American role in the military victory at Normandy over the years. The campaign resulted in the penetration of Hitler’s so-called “Fortress Europa” and eventually opened the drive to Berlin and the end of World War II. That outcome was far from certain, however, as dawn broke on June 6, 1944. Only relentless American innovation, fierce determination—and of rivers of American blood—turned the tide.

The years of preparation for the battle had been meticulous, politically complex, and logistically grueling. The plan of attack for such an enormous undertaking was equally detailed and complex. As events would turn out, of all the landing sites, the Omaha Beach would be the most difficult. Intelligence estimates projected that the defenders for Omaha would be light and inexperienced; mostly conscripts, old men, and foreign troops pressed into service for the Germans.

Unknown to the Americans, however, beginning in late 1943 Field Marshal Erwin Rommel had been assigned the task of reinforcing the Atlantic defenses for the Germans in northern France. Rommel went on a feverish process of putting in beach obstacles, building reinforced concrete bunkers and gun emplacements overlooking the beaches, and brought new troops in to man the fortifications.

In the area the Allies designated Omaha Beach, the Germans assigned the 352nd Infantry Division. They had arrived barely three months before the landings. American intelligence didn’t detect their arrival. When the U.S. 1st and 29th Infantry Divisions would land at Omaha, they were led to believe they would be able to take the beach in “a walk-in.” Instead, they faced an experienced and well-equipped German division.

The plan on Omaha had been to saturate the beaches and defensive positions with tremendous numbers of bombs from the ships at sea and bombers from the sky. The troops would use the shell craters over the long stretch of open beach as fox holes as they disembarked from their landing craft and made their way off the beach. More importantly, a battalion of amphibious tanks were set to land first, obliterating whatever defenses might have survived the bombing runs.

But things went wrong even before the first troop hit the beach.

Because of unexpected early morning cloud cover, the bombers delayed dropping their ordinance for fear of hitting their own troops, resulting in the bombs hitting further inland—missing the beach and not hitting the defenders. Worse, the amphibious tanks had been disembarked from the landing craft too far from the beach and twenty-seven of the thirty-two tanks sank, never going into action; the remaining five were easy pray and were quickly destroyed.

When the infantry troops landed they would have no ready-made fox holes to protect them as they moved off the beach, no tanks to provide support, and instead of “old men and boys,” were met with the precision of experienced German regulars. It was a slaughter from the beginning.

In the 29th Infantry Division’s zone, some of the first landing craft to hit the beach were wiped out as soon as the ramp door opened. Companies Alpha and Bravo of the Division’s 116th Infantry Regiment reportedly lost every man to the withering German fire. Not one man even made it out of the boat (this event was graphically depicted in the movie Saving Private Ryan); those troopers didn’t get a chance to fire a single shot.

The German 352nd Division placed considerable firepower on the bluffs overlooking Omaha beach. Pre-invasion intelligence believed the heights were lightly defended. Instead, they were riddled with literally hundreds of machine gun nests, mortar pits, anti-tank gun crews, and field artillery cannon positions. Most of the Americans who landed were carved up by this overwhelming firepower.

By mid-morning on June 6, the bodies of nearly 1,000 Americans lay strewn about the beach; hundreds of others had survived, but because the pre-invasion bombardment had barely hit the German defenders and without tanks, the U.S. troops had nowhere to go. They were stuck on the beach.

Commander of tactical U.S. forces for Operation Overlord, General Omar Bradley, when informed of the debacle unfolding on Omaha, began considering canceling subsequent invasion waves to Omaha; he didn’t want to risk throwing more men into a meat-grinder from which they might never escape. When the entire operation on Omaha was in danger of collapsing, a lead-from-the-front general stepped up.

Assistant Division Commander of the 29th Infantry, Brigadier General Norman Cota, showed enormous courage simply by choosing to be in one of the first waves of boats landing at Omaha. Most generals would wait on the safety of the ships until the beaches were secured. Cota, however, landed when the conditions were their most chaotic and dangerous.

Corralling as many men as he could in the few places where they had cover from enemy fire, Cota told the men that the original plan could no longer be followed. He’d come up with a new one on the fly. After taking stock of his situation and considering the men and material he had at hand, he decided to order the men to do the seemingly impossible: scale directly up the steep bluffs overlooking the beach.

“Gentlemen,” he told the troops, “we are being killed on the beaches. Let us go inland and be killed!” He then again led from the front, showing the lead troops how to penetrate the obstacles preventing their ability to move off the beach and towards the bluffs. When the first soldier to go through the breach was killed, the men following froze. Cota then immediately ran through the gap himself. The men then followed. Eventually he led them to the top of the bluff, destroyed several German positions along the way, and opened a path to get behind other German defenders.

There was still much fighting to do, but the path off the beach had been found and courage restored to previously terrified and paralyzed troops. Once the German defenses had been penetrated at Omaha, their doom was sealed. The Americans had more men to pour into the breach than the Germans had men and bullets to stop. Eventually the tide of Americans—combined with the German inability to replace the ammunition they expended—overwhelmed the defenders and the day was won.

It came at great cost, however. According to Army records, the U.S. casualties on the first twenty-four hours of the Normandy invasion were staggering: 1,465 had been killed, 1,928 listed as missing, and another 6,603 wounded. The war would languish another ten months, and hundreds of thousands of additional Americans would be killed and wounded in Europe. For this extreme price, however, Europe has enjoyed now seventy-five unbroken years of peace. May the Europeans justly value today the sacrifice made by so many Americans in on that Day of Days in 1944.