D-Day Turns 75 Today: This Is the One Thing You Need to Remember 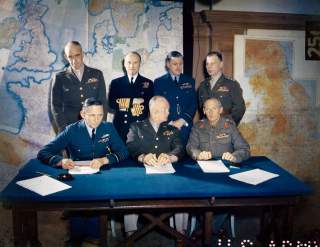 At 6:30 a.m., many people are brewing their morning coffee and getting ready for the day ahead. At 6:30 a.m. on June 6, 1944, however, the first wave of American, British, and Canadian troops landed on the beaches of Normandy, France, in what would be the largest seaborne invasion in history.

This year marks the 75th anniversary of D-Day, a battle that was a decisive blow to the Nazi regime in Europe during World War II and expedited the liberation of Europe.

Operation Overlord, the Battle of Normandy, and Neptune are just a few of the names that were initially used to refer to June 6, 1944. However, the term D-Day became so widespread after Normandy that the general public to this day uses it to refer to that battle.

“D-Day” was actually a term used by the military to indicate the generic day on which an operation would begin. There have been many designated “D-Days” throughout history, but the one that occurred on June 6, 1944, stands out among from them all.

If the invasion of Normandy had been unsuccessful that day, Europe might have remained under Nazi control, and our world might look much different today. That battle was the tipping point needed to liberate Europe.

The American troops who fought in D-Day were not fighting to liberate their own land. They fought to preserve the free world.

Most of those troops probably didn’t wake up that morning anticipating that their sacrifice would change the world. They got up knowing only that they had work to do.

That’s a valuable lesson for a generation that often sees going to work as an obligation, rather than an opportunity to effect change.

Some 6,603 American troops were killed, wounded, or missing in action in the Normandy invasion. They fought for a cause that was larger than simply securing the beaches. That sacrifice is often taken for granted today. It is essential that we do not let the significance of what was achieved on D-Day be forgotten.

Unfortunately, many D-Day survivors express worry that the anniversary will be less and less acknowledged every year. One 94-year-old D-Day veteran, Eugene Deibler, of Charlotte, North Carolina, was not optimistic about future generations.

We must not let his fears become reality.

Our generation bears the responsibility to preserve these narratives, recognize those who served, and hold fast to the lessons learned from D-Day.

We can honor the sacrifice of the troops who fought to defend the free world by believing that each day’s work holds the potential for securing freedom.

This morning, while the coffee is brewing, remember that.

This article by Emma Watkins and Alexandra Marotta originally appeared at The Daily Signal. This article first appeared in 2019.